Saturday night and another sold out show. This has become a popular occurrence at Belmont over the past few months. The bands on stage were not the latest thing. In fact. collectively, they have not had a top 40 hit or ARIA chart (as it is known these days) for over 15 years. Both share a commonality; that being their lead singer was taken too early, and both in tragic circumstances. We all know the failure rate of replacing a lead singer in a successful band is almost 100 percent. So as a reviewer you must ask the question, why would punters pay a premium price to see a band without its original front man? The answer to this is relatively simple. Both replacement singers are autonomous in their own right and captivate with their own persona. MI-SEX carrying only two originals, ploughed through a 10 song set of classics and a couple of originals. Steve Balbi provided his own twist on the 80’s classics ‘People’, ‘But You Don’t Care’ and of course the late 70’s classic ‘Computer Games’. Throw in a couple of original songs ‘Somebody’ and ‘My Sex Your Sex’, both from their new untitled album due sometime this year. Both songs sounded very heavily influenced by the late David Bowie and you have a powerful starter to a great evening.

Dave Gleeson has been singing with The Angels for over 5 years now. A commanding performer, not shy of ego, Gleeson continues to put his own take on the Angels classics. The hit list read like an anthology from the 30 plus years when Doc Neeson fronted the band. The thing that impresses you most about Gleeson is his love of the crowd, the band and himself. At times he moves like a close relative of Jagger. The eccentricity displayed is fuelled by the ever increasing fever of the audience. If the band accidentally forgot a lyric rest assured there would be 500 people who could fill in for them.

The Brewster brothers remain on top of their game with power cords and individual riffs. These guys could easily be 30 rather than in their 60’s. Having your son along as the bands bass player and Nick Norton on drums, simply improves the bond between these guys. As far as a song list, the band left nothing in the tank. ‘Shadow Boxer’, ‘Face The Day’, ‘Marseilles’ and the imbedded classic ‘Am I Ever Gonna See Your Face Again’ complete with audience backing vocals. The lady next to me, well in her 60’s, used the moment to swear then giggle like a naughty school girl, fun all round.

After seeing these guys a few times in the last year they have no immediate expiry date. Unlike a lot of bands and well know lead singers they are far from finished. With Gleeson at the helm this band could go around comfortably for another 10 years. Imagine that, 80 year olds singing the compulsory swear words to ‘Am I ever gonna see your face again’. Bring it on I say. Well worth a look. 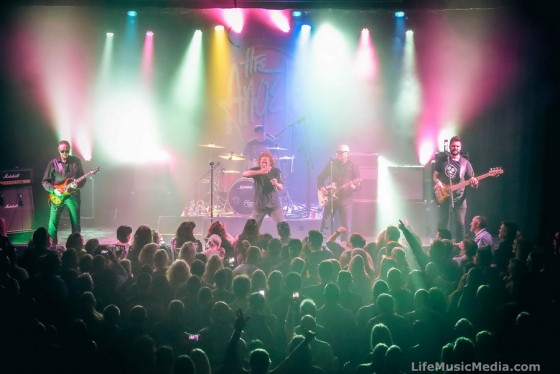