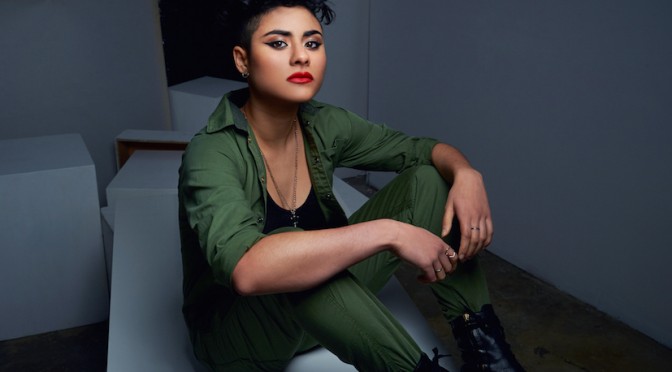 A stage moniker borrowed from a 16 th century philosopher; an Unearthed gong before finishing high school; a teasing EP which was salivated over; and a 3-time ARIA nominated debut album. And all of this before your first headlining tour. It’s a helluva back-story for Montaigne’s eagerly anticipated run of headlining shows in support of her world-beating debut Glorious Heights.

With such a build up, it’s no surprise that the stage show was nothing short of polished indie pop perfection, with equal parts vulnerable song-writer and craftily choreographed synth moves. It’s backed by the precocious confidence of the singer herself (whose real name is Jess Cerro), which at once belies and speaks to her impossible youth. It’s this precociousness which gives her the confidence to begin the triumphant Corner Hotel gig with “I’m a Fantastic Wreck”, a song that announced this enigmatic singer on the Australian music scene. It’s a bold move, but one which is in fitting with the boldness of the artist on display.

The touchstones here are known, appropriately, also by a sole moniker: Bjork, Regina, Bowie, Byrne (of Talking Heads fame). And while it’s great to cross-reference, Montaigne often stands slightly askance and not easily pigeonholed, and that’s mostly down to that booming, cutting voice which is instantly arresting. On record, it melds perfectly with the theatrically-tinged contemporary interpretation of 80s synth pop, which dials down the cheese and cranks the darkness.

On record is one thing, but does is translate to the live setting, especially that of the sticky-floored variety of venue often reserved for the crunchier sides of indie-rock? By all accounts, yes. While moments of vulnerability do seep through (set closer ‘Because I Love You’ in particular is tweaked slightly to accommodate clearly fatigued vocal chords), on the whole it’s an incredibly captivating spectacle. Backed by a well-drilled trio (drums, bass and keys/synth), it is a well thought out and polished exercise in which the sum is greater than the parts.

The package is highlighted by disarmingly astute between-song banter, which instantly gives way to assured choreography with the beginning of each song. Theatricality is etched on Montaigne’s face, while genuine emotion is conveyed between singer and audience on almost every turn. ‘Consolation Prize’ sees the singer on the edge of stage, barely visible to the massing throng, but intensely connected to those in the small cabal around the front. Eye contact is given and maintained between a clearly enraptured audience and an earnest artist. It’s a beautiful moment which seems to encapsulate that magic which has captivated the indie music scene to Montaigne’s ways. It’s easy to be cynical about such a buzz for an artist, but when you see it in the flesh, it’s impossible to resist its draw.