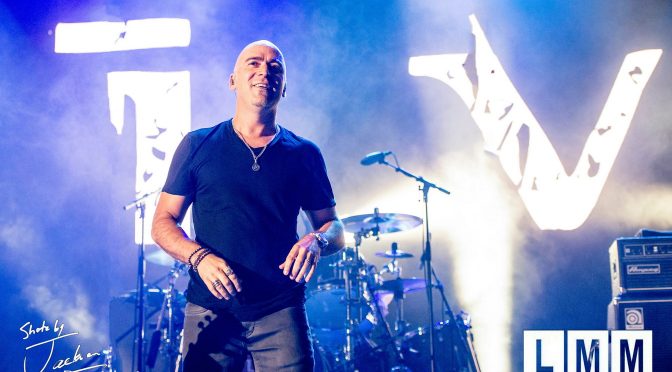 Melbourne turned on the weather for show two of Live’s Australian Reunion Tour on Friday night. under a perfect sunset, the band who most music lovers believed would never play together again, did just that and entertained a 7,000 crowd with passion and perfection. Melbourne was the second of only three shows in Australia for this tour.

Flamboyant front man Ed Kowalczyk backed by originals Chad Taylor, Patrick Dahlheimer and Chad Gracey, smiled throughout the set as he led his brothers from York Pennsylvania into a 16 song set that delighted the packed house. The addition of an extra drummer and guitarist added yet another dimension to this memorable night.

The set list featured songs predominantly from the band’s first four albums. Throwing Copper the second studio album and the band’s first worldwide smash provided six of the sixteen songs on offer. The Johnny Cash classic “I Walk the Line” proved yet again years after his death, the man in black continues to influence the music world.

Throughout the show there were constant references to the band’s love of Australia “It’s so great to be back in Australia with my brother” receiving a roar from the packed house. “White Discussion” complete with crowd sing along ended the main set. Returning to the stage Kowalczyk requested the audience break out their phones and turn their lights on as we don’t have cigarette lighters any more. With an acoustic guitar in hand and solo on stage Kowalczyk gave an acoustic version of “Turn My Head”. Both Taylor and Kowalczyk hugged and shared emotion on the bands return to stage.

A chilling portrait of Chris Cornell was on display whilst Kowalczyk did his own version of Audioslave’s “I Am the Highway” completing the bands two set covers. Perhaps the best was saved until last with “Lightning Crashes” providing the audience with one last singalong, a group hug filled with brotherly love followed and the band promptly departed.

Earlier in the night The Calling lead by Alex Band opened the night to pleasing reception from the loyal crowd. The front area was packed as the band played a set list predominantly from their two studio albums Camino Palmero and Two with a stirring version of U2’s “With or without you” thrown in. The band finished the set with their worldwide hit “Wherever You Will Go“.

Lifehouse from Los Angeles completed the trio of bands on offer this night. Lead by Jason Wade the band’s set comprised of songs from most of their 7 album back catalogue. Crowd favourites were “Hanging by a Moment” from the band’s debut studio album, No Name Face and “You and Me” from the bands more recent offerings. Bass player Bryce Soderberg gave the audience an opportunity to sing along doing a solo version of the Farnham anthem “You’re the voice” much to the crowds delight. Although only the first verse was sung, it confirmed the bands love of Australia.

Overall Live continues to retain the respect and love of the Australian audience, may the harmony continue and we see them in Australia again in the not too distant future.

All Over You, Operation Spirit, Pain Lies on the Riverside, The Dolphin’s Cry, Selling the Drama, I Walk the Line, Pillar of Davidson, The Distance, I Alone, Lakini’s Juice, White Discussion.

Turn My Head, Rattlesnake, Run to the Water, I Am the Highway (Audioslave cover), Lightning Crashes