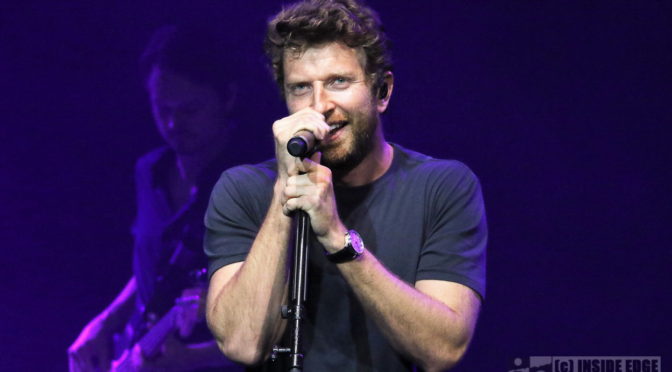 Brad Cox, fresh from the Snowy Mountains of NSW was a late addition to this bill, and turned up with two of his band to give the crowd a taste of his recent album release from a three piece guitar / mandolin ensemble. Brad is a big man with a huge voice, much in mould of Luke Combs, but with the Australian twist of humour and country that will set him apart. We got a handful of songs from the album, including Too Drunk to Drive and Somewhere Like Cheyenne, and I am certainly looking forward to catch him again with the full band before long.

Jon Pardi is on his first trip to Australia, and probably had the lion’s share of the healthy Enmore crowd with him as their main focus of the night – a dominating presence onstage with trademark white Stetson planted firmly on his head, he ripped into the set backed by a full band with so much energy onstage, including an excellent lead guitarist and fun violinist. Pardi is something of a Country Pop crossover phenomenon, but with his roots firmly in the more traditional country sound. Oh yes, and the ladies love a good Pardi!

We got a healthy selection from JP’s two album collection, both 2014’s Write You a Song, with the recent California Sunrise release getting plenty of airplay.

What I Can’t Put Down was the first single of album number one, and this was followed up with Night Shift and Paycheck from the new record. Lucky Tonight saw some sensational twin country rock guitar lines being traded by JP and his sidekick. JP provides the simple acoustic intro to his recent hit single, a country ballad, She Aint’ In It, featuring a beautiful pedal steel solo. He refuses the invitation to do a shoey, giving the crowd a “Cheers!”

We then got Aint Always a Cowboy, a new song with Pardi’s voice oozing bourbon and honey, and he has the ladies on the barrier swooning. Title track, California Sunrise kicks up the tempo and the Enmore crowd starts moving, with more guitar breaks and the lap steel wailing, while JP holds the crowd in his hands with the refrain “Australian sunrise – the song ends with a ripper guitar – violin duet.

The set rolls on with lots of cameos from the band, and the whole crowd clapping along, and then a song for all those booty calls made with poor judgement, with When I’ve been drinking. Can’t Turn You Down is another ballad in which JP really takes centre stage, fully supported by the talented band, and the ladies get some signature Pardi moves with the hips which cause more excitement!

The set builds up to a climax with “one for the wild ones” and a rousing rendition of Cowboy Hat, with the violin playing a big part in this one, as as it does in the intro to All Time High, one of the Pardi anthems, chunky riff in the background and the layers of melody that are common to many of the Pardi songs. Heartache on the Dancefloor had the crowd singing every word of verses and chorus, another tasty guitar solo, and a huge audience reaction.

Out comes the ukulele for the 2015 hit single Head Over Boots, and the theme rolls into the set-closer, an absolute rip- snorter of a rocking country number, Dirt on my Boots, which sees Pardi really play up to the crowd and closes with a big stadium-rock finish from the band.

Brett Eldredge started out a year or two earlier than Pardi in Nashville, with his first single in 2010, and four albums released to date, with the self-titled record most recent in 2017.

Lose My Mind opens the set and sets the tone for a very slick and polished performance backed by a bunch of young slick looking pop-rockers, with twin lead guitarists sharing the spotlight on this one and a few more of the songs. Somethin’ I’m Good At is another poppy number, followed by the ultra-moody Cycles which featured Eldredge in little more than silhouette onstage.

Don’t Ya was the first big hit for Eldredge, going Gold in the US in 2012, and then he rolls somewhat inexplicably into an innocuous cover of Queen’s Crazy Little Thing Called Love. The highpoint of the set for sheer emotion was rather spoilt by the constant chatter and shouting of a good portion of the crowd, many of whom had their backs to the stage – Raymond was the first single, written for BE’s Grandma while he watched her suffering from Alzheimers, and this was performed solo in the spotlight by BE and acoustic guitar.

Long Way Around kept the solo acoustic flavour, which really showed off his excellent voice and had the crowd in full cry for the chorus, with the band kicking back in for the slick hit ballad Mean to Me, and Brett gets the crowd to light up the venue with their phones and performs without lights on the stage. Love Someone opens up with a big kick drum and a catchy guitar line and brings the atmosphere back up to serious party level, which carries through to another hit single in Drunk On Your Love.

The Reason is one off the new album, and this gets morphed into The Temptations hit My Girl, before the set winds up with Time Well Spent, and Wanna Be That Song, before the crowd dances their way to the 2013 hit song, Beat of the Music – with a bit of mambo thrown into the country pop sounds. 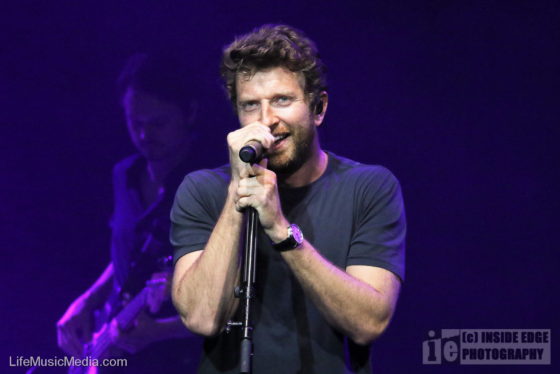