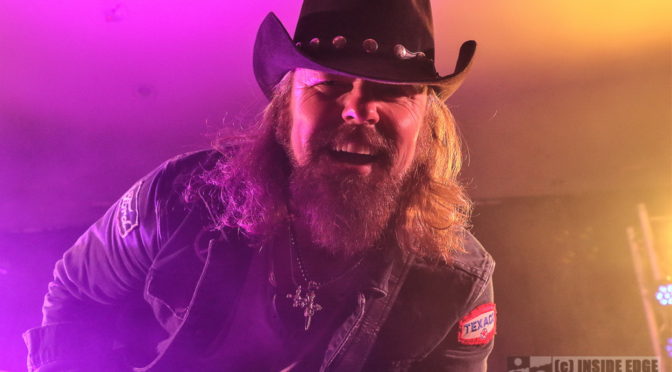 It is not that often that we get the chance to see a cult Canadian country-rock band in Australia, so when they arrange a couple of random sideshows after their Winton Way Out West appearance, it seemed sensible to get to see one of them at least – The Road Hammers were over here a few years ago for CMC Rocks and left a pretty hot reputation behind.

On a fairly quiet night outside Ipswich in the Sports Bar of the Racehorse Hotel in Booval, the early punters were treated to a set of high quality blues rock from The Ayers Rockettes, a bunch of seasoned musicians who have performed and recorded with the likes of Keith Urban, Doc Neeson and James Blundell among others, as well as having a spell as Urban’s backing band. They warmed us up with a set of originals and covers, before leaving the stage, to reappear in alternate outfits and with an additional member in frontman Darcy Crawford, as the new band Saltbushsix. Darcy has recently returned to Oz after 20 years in the UK, and joined the band in time for Tamworth this year, and they have have just released the album Beyond The Ranch, which they played from start to finish. When you team up a rock solid rhythm section with two sensational lead guitarists of contrasting styles, and stick an impressive and charismatic frontman on vocals and acoustic guitar, you find that all sorts of magic happen – and with a set of excellent melodic rocking country tracks such as the first single Live From Our House (Saturday Night), Some Dust Don’t Settle Down (co-written by Mitchell Tenpenny), and the epic set-closer in Swerve, one of a few tracks co-written by Nashville songwriter Patrick Jason Matthews. This is a band that has the cross-over potential to attract fans from the rock, blues and country genres, so catch them while you still can!

The crowd had built up to a fair size when The Road Hammers hit the stage and delivered a real in-your face set of high energy southern country rock, with Canadian humour and charm, and really showcased their somewhat unique and exciting blend of music derived from the trucker bands of the 1970s and 1980s, and with plenty of references to a wide variety of influences from The Beatles through The Eagles to Deep Purple, and an onstage performance that highlights their 15 years as a performing band – many of their early songs were covers of classic tunes – and then the most recent albums The Road Hammers II, Wheels and The Squeeze feature mainly songs written by front-man Jason McCoy with a range of co-writers, including bassist Chris Byrne and Guitarist Clayton Bellamy.

Crazy About You opened the set, and then with Get On Down The Road, we saw Clayton take his mike and physically corral the crowd from all parts of the room and the outside area and “encourage” them into the wide open space in front of the stage – where they remained for the next 90 minutes and all had a much better time! East Bound & Down was one for the first hits for the band, and was followed with a rousing version of Nashville Bound, the first band-penned hit. The band has a style all their own, with plenty of chat and interaction over chugging riffs and rhythms, with an almost gospel preacher feel when Clayton Bellamy takes the lead – McCoy’s delivery is in the more laconic Canadian style, and the contrast just makes the whole thing feel exciting and different.

The Lowell George song, Willin’ was extended into a medley that included Prince’s Purple Rain, and The Eagles Easy before reverting to the original song again, after a 10 minute journey through the different musical styles. Then we got the southern dirt anthem of Mud before the two songs which must be the hardest to deliver from a vocal perspective – Girl On the Billboard has enough tongue-twisting vocals, and includes a set of choruses that go down a tone each time, as the band lowers themselves eventually to the floor to hot the really low notes. Then we get the new version of the 1959 Australian song I’ve Been Everywhere, which has been a hit for a number of different artists – while the version delivered includes mostly American town names delivered at speed, and shared between the three front men, the boys managed a couple of verses of the original Australian town names which got a great response from the floor!

The guys said thanks, and then agreed that there was no point leaving the stage, waiting for applause, and then coming back, so they launched into the slightly mournful All Your Favourite Bands before the intro tape brought up the signature Hammer track, I’m A Road Hammer which is southern rock at its finest, and the Steve Earle classic Hillbilly Highway to round off one of the most fun and entertaining gigs of this year – we need The Road Hammers back in Australia sooner rather than later!