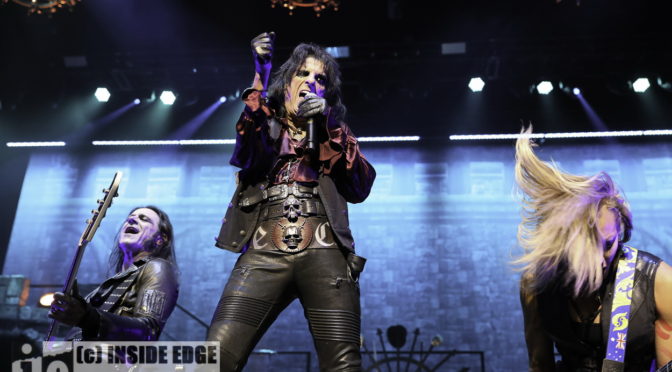 MC50 – A phenomenon since 1964 when Wayne Kramer and bandmates put this beast together as one of the earliest garage rock acts, releasing the seminal Kick Out The Jams as their debut album, recorded live in 1968, with their two follow-up records also being highly influential, until the break-up in 1972.  The current line-up was for the 50th Anniversary of the album, with Kramer joined by a bunch of high profile members – Marcus Durrant (Zen Guerrilla) Kim Thayll (Soundgarden), Brendan Canty (Fugazi) and Billy Gould (Faith No More) to deliver the package in an updated version!

Coming across as if 30 years younger, Kramer handled the vocals for Ramblin’ Rose, and then handed over to the powerful soul/rock voice of Durrant for the seminal Kick Out the Jams – Garage punk at it’s finest.  The riffs of Come Together, Motor City Is Burning and Tonight may seem familiar – maybe because they have been used by countless other bands since MC5, before Call Me Animal, and the monster bass and drum driven Looking at You, with a ripping dual guitar solo from Kramer and Thayll!

AIRBOURNE – Victoria’s finest exponents of in-your-face, balls-to-the-wall rock’n’roll, the O’Keefe brothers, Harri Harrison and Justin Street hit the stage to the Terminator 2 soundtrack, and deliver a blistering short set of their absolute finest – Ryan just pounding the kit from start to finish, as well as winding up an old air raid siren prior to Live It Up, and Justin and Harri in perpetual motion across the stage, while Joel just delivers up front.  Ready to Rock opened the set, followed by new album title track Boneshaker and the following Burnout the Nitro, before we head back to the classics.

Back in the Game and Girls in Black are just no-frills balls-out rockers, and Joel ends up in the audience as he delivers the riff and solo from someone’s lap, before appearing back onstage for the climax with Live It Up, followed by the trademark Runnin’ Wild – incl snippets of Let There Be Rock – just in case anyone missed the AC/DC influences in the previous 6 songs!

ALICE COOPER – After all these years, from strutting around at local discos to “School’s Out” in the early 1970’s, I get to see the man in concert for the first time, and to take photos as well – something of a bucket list for this reviewer!

Intro tapes and a “Welcome to the Nightmare Castle” before the curtain drops to reveal a Hammer-Horror stage set, which perfectly sets the scene for the “Schlocky Horror Show meets Beauty & The Beast” performance – slightly quirky, gothic horror with a splash of comedy – matched by the triple-guitar assault of Ryan Roxie, Tommy Henrikson and “Hurricane” Nita Strauss, all super-talented guitarists, backed by the rock solid rhythm section of Glen Sobel on the drums, and Chuck Garric on the bass!

The 4 time 18 year old Alice Cooper is the consummate ringmaster of this rock’n’roll circus, and he delivers a standout show, with many of the classic set pieces from the past, and a few old-time tracks like Bed of Nails, the gory Roses on White Lace complete with bloodstained bride, and the School’s Out era My Stars.  The set opens with the cracking camp-horror of Feed My Frankenstein, complete with the first appearance of the unchained monster, and the classic No More Mr Nice Guy, which highlights the impressive backing vocals that we get throughout.

Bed of Nails, Raped and Freezin’ and Fallen in Love precede the cracking riff of Under My Wheels and the first of countless solos from Ryan Roxie.  ‘Jason’ appears with machete to dispose of a couple of teen selfie-takers in He’s Back (The Man Behind the Mask), and then guitar battles commence in earnest with Ryan and Nita in I’m Eighteen, and a drumming masterclass from Sobel in a monstrous Billion Dollar Babies.

The crowd erupted to the opening chords of Poison, the classic AOR hit, with the catchy chorus and harmony vocals.  Ryan delivered a solo from the battlements, before the theatrical Roses on White Lace, and then we got an extended band segment with Devil’s Food and Black Widow being jammed, including a Bass and Drum solo, and some epic triple guitar soloing.

The master returned in strait jacket for Steven and the old-time Dead Babies, including the monster baby roaming the stage, and the guillotine appearing to decapitate the boss while the band jams I Love the Dead.  We get Escape, and then the nicely choreographed Teenage Frankenstein with Alice in the mask and Nita front and center for the first solo, followed by Tommy and then Ryan to close the song and the set – phew!

Department of Youth was the opening encore, and then that riff blasts out into the arena, still sounding huge 48 years on – School’s Out with Alice in white top hat and tails, balloons, confetti cannons, a bit of Another Brick In The Wall mid-song, and some NSW Firefighters to join the finale.

Sheer entertainment on a grand scale – hard to beat this one for gig of the year!

Check out the full photo gallery from the show here!