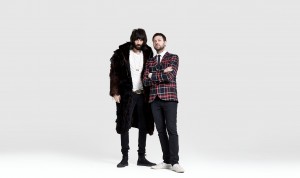 Melbourne five-piece, The Delta Riggs have been confirmed as the support act for the Kasabian tour this August.

Throughout May & June, The Delta Riggs conquered stages throughout Germany, Holland, Belgium & the UK, including key performances at The Great Escape, Liverpool Sound City, dutch tastemaker festival London Calling (NL) and punctuated by the legendary Jimmy Page turning up at their show at Notting Hill.

Their rattling and rapturous new single “The Record’s Flawed” from the band’s forthcoming second album, ‘Dipz Zebazios’ was released via the newly re-launched Rolling Stone Australia and quickly found a home among “Triple J’s Top 10 most played tracks”.

————–
The distinct sound and integrity of Kasabian’s fifth studio album defines the very essence of the band, their trademark sound distilled and re-packaged into one incredibly exciting, unique statement of intent.

’48:13’ is driven by the continuous evolution and musical experimentation of the band through their previous 4 albums, spanning a career which celebrates its 10th year with the release of this, their 5th album.

1st single Eez-eh is a relentless all-night tune, which will doubtlessly ignite at the shows.

‘‘Eez-Eh’ is far from being a serious take on the world’s issues though. Whilst we’ve grown used to Kasabian the rock stars, this is a rave-ready hint at a return to the electronic experimentation that characterized their self-titled debut album way back in 2004, while still retaining their swagger and keeping things tongue-in-
cheek, cartoon-like and – most importantly – fun.’ NME

Rarely do bands such as Kasabian push the boundaries with each album and deliver stunning results with releases such as West Ryder Pauper Lunatic Asylum and Velociraptor!

They’re cocky, cool, and here to rule so bow down before the kings of indie rock swagger as they tour Australia throughout August.