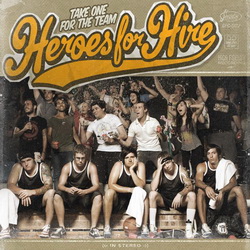 Take One For The Team, the second full-length album from Sydney pop punk act Heroes For Hire definitely has a strong pop punk sound that plants them on the same page of any well known Fueled by Ramen band.

When I first heard the intro of track 1, “No Milk Will Ever Be Our Milk”, I was flooded with memories of being 14 and bouncing around to Simple Plan and Fall Out Boy in my bedroom. For those who don’t favour the whiny vocals and energetic drumming and guitar riffs reminiscent of bands like Blink 182 and Sum 41, then this definitely isn’t an album for you.

Take One For The Team is refreshing and youthful; a nice change from what the local music scene has been thriving off lately. The 12 tracks on second full length from the Sydney boys are contagious; I found it difficult making it to the end of the album as I was inclined to replay songs such as “All Messed Up” and “Secrets, Lies and Sins” over and over again.

Overall, Take One For The Team was a consistent and well constructed album, recorded in Baltimore by American producer Paul Leavitt, whose experience with All Time Low, Circa Survive and Senses Fail (to name a few) is evident in tracks such as “No Milk Will Ever Be Our Milk” and “It’s Not Too Late”. However, track 11 “Keep Me Safe”, though a great song was the only ballad on the album and stood out like a sore thumb, against the fast-paced tracks. Perhaps with one or two more slow ballads it would have flowed more consistently. Regardless however, it was a great song and an altogether great album.

I definitely recommend listening if you want to bring some warmth into the dreary winter days and get you bouncing around like a teenager at their first gig. Heroes For Hire delivered a great follow-up to their 2010 debut, The Life of the Party, solidifying their place in the Australian music scene; Take One For The Team can’t help but put a smile on your face and a spring in your step from beginning to end.