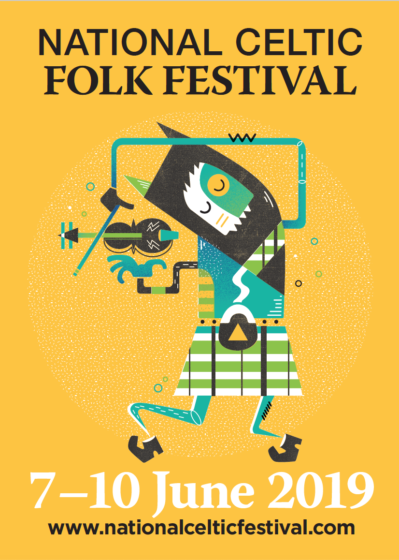 It’s time to get your Celt on! Grab your warmest tartan attire, pack the car with your favourite Celtic tunes or jump on the Port Philip Ferry and head down to the bustling Bellarine for the 17th annual National Celtic Festival.

Held over the June long weekend (7th-10th) in Victoria’s picturesque seaside town of Portarlington, lovers of culturally rich music, dance and arts will congregate to celebrate all things Celtic and Craic.

Attracting thousands of visitors every year, the National Celtic Festival is the premier folk frenzy gathering and the biggest of its kind in Australasia. It transforms the foreshore and surrounding haunts into a bustling winter-wonderland of talented musicians and performers, presenting concerts across 14 stages over 4 days, with showcases, dance, theatre, literature readings, masterclasses and more.

This year has already attracted the likes of The Young Folk, Maggie Carty & Máirtín Staunton, The Lumber Jills, Colin Lillie, The Maes, Claddagh, Rich Davies & The Low Road, Fiona Ross & Shane O’Mara and Bush Gothic to name a few, with more artists to be announced over the coming weeks.

In a National Celtic Festival first, the team will welcome the Australian Highland Cattle show! Highland cattle – affectionately known as “Koos” – were imported into Australia by Scottish migrants in the middle of the Nineteenth Century and this show is a great place to see 60 of the best of the breed, with cattle appraised by an international host judge. The event, which is held on the Sunday, is in conjunction with the Australian Highland Cattle Society.

Other special projects this year include Theatre C21 (Ireland) – a one-woman black comedy set in contemporary Belfast that is an energetic, funny and compelling tale of how easy it is, with the right (or wrong) combination of events, to slip into homelessness. It’s highly topical in its unflinching look at credit card debt, the benefits system, addiction to prescription drugs, and living on the streets. Kin and the Community (Scotland) is a partnership with musicians Fèis Rois. The band have spent several months working alongside acclaimed fiddler and composer Duncan Chisholm to research a local story, create a film, and an original soundtrack for it. The project has allowed them to explore cultural heritage and learn new skills in composition, film-making, research and ethnology.

The National Celtic Festival market features stalls selling an array of goods and crafts profiling local designers, Celtic wares and a variety of local produce. Visit clans and associations from across Australia with displays including Celtic martial arts and the resident Vikings who settle in for the weekend to present traditional Vikings practices of wrestling, crafts, and iron mongering. And don’t forget if you fancy a cruise, partners Searoad Ferries and Port Phillip Ferries are at your disposal too.

From young blood to veteran artists, bagpipes to bodhrans, there’s something for everyone in 2019!

Head to www.nationalcelticfestival.com for further information and to book tickets.

Head to www.nationalcelticfestival.com for further information and to book tickets.