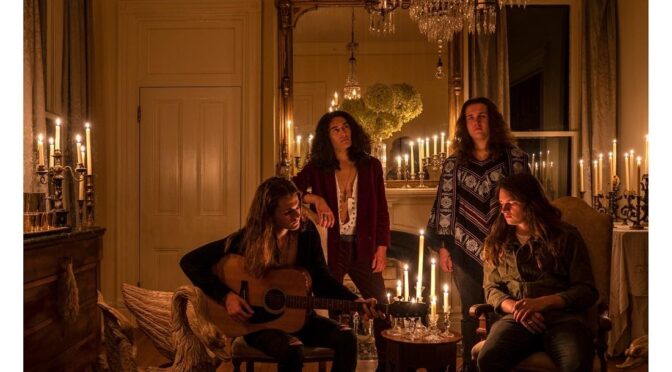 I heard the first release from this EP a few months ago and started raving about the band then – loving the vintage classic rock sound, heavily amplified blues, rock solid drums and a twin-guitar assault steeped in the likes of MC5, Free, Deep Purple, Lynyrd Skynyrd and Bad Company – all brought up to date with some supercharged hooks that combines that true classic rock sound with a modern southern-rock swagger!

I also reckon they have one of the best band names around!  Naked Gypsy Queens are originally from Tennessee and then moved to Nashville as a bunch of teenagers where their goal was “to become the baddest live band around” as Chris Attigliato has stated.  “We were loud. We were a band you had to see onstage. It started to become a cult thing, with lines forming around the block at some venues.”

The band met at High School around attempts to bash out Whole Lotta Love, and the Georgiana EP is a wonderful and varied collection of tracks that in part pay a little homage to that legacy.  Recorded in Detroit as very much a live session, the EP delivers a raw and powerful set that bodes well for the future.

Down To The Devil is a straight up classic rocker, driven by a solid riff and solid bass and drums that leads us into a catchy chorus.  This is not complicated music, but it lifts the hairs on the back of the neck, and the band deliver the first of several sharp guitar solos – not sure whether it is Chris or Cade Pickering doing the honours!

The first single, Georgiana, is as if Led Zeppelin got crossed with The Cadillac 3 and delivered a raw southern blues rocker that reeks of fuzzed-out slide guitar and some great off-beat drumming, before the mid-section kicks in at a cracking pace, allowing a ripper of a solo to take off.  The track then drops back to the original tempo, and sees an epic set of drum fills from Landon Herring as part of the close.

The opening guitars of Strawberry Blonde #24 have a Richie Blackmore vibe, but in a stomping southern frogstomp style, with Chris’ vocals having that rough southern Chris Robinson drawl, but delivered with Coverdale power.  The track just builds in intensity through some intricate guitar work, while Bo Howard roams around on the fretboard of his bass as if Jack Bruce reincarnated, as Landon powers away on the kit.

A dirty, grungy minor-key beast is up next in Wolves, which holds back in the verse before erupting into a chorus of soaring vocals, and sees an unusual melding of two very different guitar styles that actually fits so well together.

The EP closes with a soulful but powerful ballad in If Your Name is New York (Then Mine’s Amsterdam) which opens with just vocals and guitars, from Chris and Cade before the band slides in with a steady beat. Chris delivers the cleanest lead vocal of the EP and shows off a considerable range, while the guitar break that leads us to the close screams 1980’s classic rock solos at their best.  This is a band that promises to be a wild and electric live experience, and I for one can’t wait to get the chance to see them play!

Down To The Devil : https://www.youtube.com/watch?v=scD_XWvDFhc