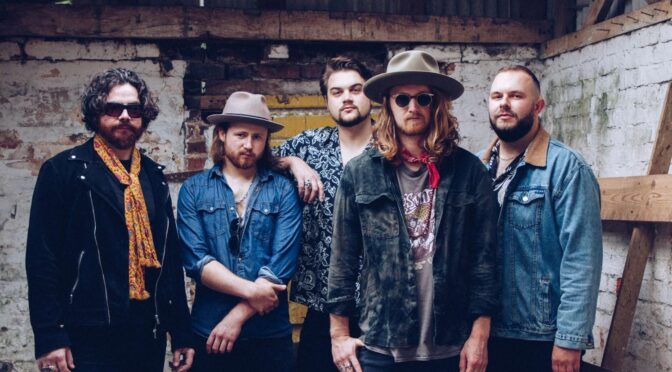 Debut albums are always really interesting to review, and while this one only has 8 songs on it, it delivers a solid punch.  Closer to home for me is that the band are from my home town of Oxted in the UK, and are launching the album at one of my early watering holes – where us cocky 16 year olds could always get served!

The PR blurb includes – “Formed at the start of the Covid pandemic by a bunch of long-time school friends and musical acquaintances, The Karma Effect are a 21st Century take on a classic 70s rock, roll’n’soul sound; big on keys, guitar riffs and huge vocal melody, all combining into a grandiose sonic soundscape that draws upon the best of yesteryear.”  I include this because it is a pretty good summary of what I have been trying to put into words in the week or so of listening to this 3 times a day!

Lead singer Henry Gottelier had written a few songs during the early days of COVID and was going to record for a solo EP release, but in the process, the band formed across Zoom and other platforms, recorded and released a couple of singles, and got TMR Management interested enough to sign them there and then!

All eight of the tracks on this release standout in their own way, and while falling notionally under the New Wave of Classic Rock genre, this is a band that sounds like it clicked really early in the piece, with every member sharing a common vision of this classic blues-rock sound, gritty guitars, lush keyboards, solid backing and occasionally raw, but definitely melodic rock vocals, and came up with a bunch of great songs to showcase the sound perfectly.

If you like your Bad Touch, Inglorious and Trident Waters with a touch of old school Thunder thrown in the mix, then The Karma Effect might be up your alley!

Steal Your Heart was released as a single and brought the boys some radio play and exposure, offering a swaggering slice of Bad Company crossed with The Black Crowes, with a cracking vocal performance from Henry, and the keyboards having just the right prominence in the mix.  Some epic backing vocals in the pre-chorus and more in the chorus, this has hooks aplenty.  There is a short and crisp solo mid-song, and then a chorus to close – sharp and very much to the point!

The swagger and strut continues into Doubt She’s Coming Back which opens with guitars and voice over a howling organ line, before the rhythm section kicks in to provide a solid beat under an almost funky riff, which slides into a great lead break that leads to the pre-chorus.  There are some tight accents from Ash Powell on drums, who is tight with Liam Quinn on bass, and some complex beats roll into the solo – all the while with Scott Emmins wailing on what sounds like a Hammond organ.

Mercy has just been outed as the next single from the record, and is a solid blues rocker with a neat key change that really fits Henry’s voice, and there is a superb middle-eight with some cracking backing vocals before the slick little solo and that key change again.  This has some real commercial hooks in it, and is a good single choice.  The next track Stand, is complex and clever, which really needs lots of listens – powerful vocals over a semi-acoustic first verse, which then grows in intensity through some great slide guitar, tasty piano work, and what develops into a tour-de-force lead vocal performance through the latter half of the track.

The boys throw down another twist with Wrong Again, full of melody and harmonies, echoing the likes of Free and the aforementioned Bad Co, with some flashes of Deep Purple that leads into the odd little interlude before the ripper of a solo blows up – I love the soulful swagger in the outro, which really sets a stamp on the track.  There is punchy beat to The River, with another chorus that shows off what I am starting to feel is the band’s unique characteristic in terms of clever slightly off-beat harmonies that see the voices and guitars really combine to produce a very distinct impact.

A bluesy number with a touch of funk, and more strong vocals in Testify, which avoids any obvious gospel touches, but just has that feel in the backing vocals in the chorus.  The guys throw in a few accents under the scintillating start to the guitar solo before it rolls on into more standard phrasing, and into a couple of choruses which see lead guitar breaks wail around the vocals.  The record closes with another bluesy ballad, Save Me, which again sees the band deliver on so many levels.  The guitars are slick, Henry’s lead vocal is incendiary, the backing vocals set just the right tone with some “Hey Jude” vibes in harmony with the lead guitar melody, bass and drums are solid as a rock, and the keyboards add that extra dimension throughout.

After such a positive review, it is worth pointing out that in common with a bunch of young rock bands in the UK, and no doubt elsewhere, The Karma Effect are not inventing something new.  They offer a slightly updated and personalised twist on some very well-established musical references, but they combine to do so with such a polished performance, featuring well-crafted songs, that they give themselves every chance of lifting themselves above the pack.