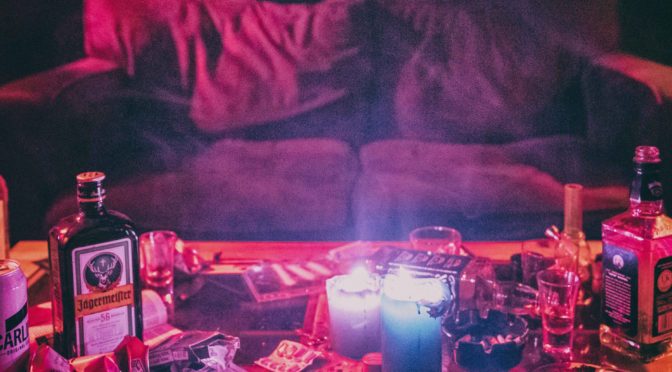 Since the release of their critically acclaimed debut EP, Dancing for Money (2018), this Oxfordshire (UK) based three-piece band have toured their contagiously hook-filled, fist pumping sound to packed venues around the country, as one of many rock bands in the NWOCR universe.

One review of that first EP said “Molly Karloff have enough balls about them to crash through the barriers and make the rock world take notice” (Powerplay).

This is high-quality heavy melodic rock with a tinge of grunge that stand apart from some of their current contemporaries being that bit heavier, without losing much of the melody, and for a three-piece they really pack a punch – reminding me a bit of The Zico Chain, Heaven’s Basement and Imperial Vipers from a few years ago in the UK, Royal Blood at their peak, and Aussie bands like The Dirty Love, Tracer, Maeder and Electric Mary.

Title track and EP opener Supernaturalation has that baritone grunge guitar riff over the pounding bass and drums before Simon G’s voice batters you immediately with its power and a slight sneer in the tone, and the chorus is so catchy.   There is minimal cleverness about the production – it is clear this is a three-piece from the solos, but Neil Haynes has brought the absolute best from each of the band members in the mix.

The single released in January was She Said, which kicks off with the distorted chunky wah-wah riff which is then drive by something of a groove under the powerful slabs of guitar, and some punchy and slightly hypnotic drumming from Jowie, with another impressive solo from Simon, and some effective backing vocals in the chorus.

An old school Iommi-like guitar break opens up the almost punk Do You Wanna? which will have audiences slamming off the walls in the crowd at shows, and Do It Again takes some of that punk attitude and adds a bit of heaviness as well as some superb vocals – the band really work well together across the whole EP, with the drums and guitars finding a particular connection that underpins all of the songs.

The EP closes with The Other Side is a slightly less frenetic slice of rock, with a focus on a rock-solid beat and super catchy hooks, and there is a bit of an Ian Astbury feel to the vocals here which really works with the dirty grungy guitar sound.

A really solid effort, and great value in 5 tracks and around 20 minutes of pulsating quality hard rock from a band that certainly stand out from some of the cleaner, straight-ahead and more derivative bands out there – and a recent online FB poll among the NWOCR fans put this up as the EP of 2020 so far, which means there are few other out there sharing the good feelings!