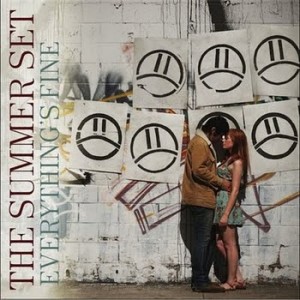 The Summer Set’s new release lives up to its title, “Everything’s Fine”, as it isn’t horrible but it’s not great either. For me, it’s just fine. It does have its high points and alas, it also has its lows.

Everything’s Fine is the second full length from the Arizonian quintet and it delved further into the ‘pop’ territory that was hinted at in Love Like This (released 2009), which had more of a pop punk sound. The Summer Set worked with ‘super-producer’ John Fields, who has previously worked with the likes of Jimmy Eat World, Jonas Brothers and Switchfoot, for Everything’s Fine and this was definitely reflected throughout the album.

It’s easily to understand the popularity surrounding The Summer Set, with their sweet sounding melodies and their catchy lyrics. These elements for me really shone when teamed with acoustic guitar on “Mona Lisa” and “About a girl”, a unique choice for the album opener.

Another great acoustic number on the album was “Thick as Thieves”; a fantastic ‘poppy’ wonder, which shamelessly I couldn’t help but sing along too. Though Everything’s Fine had enjoyable moments with cute, and fun sounding songs, it didn’t quite have as much substance and depth as their previous work. This is where I found the lower points of the album.

A few of the songs however, were an interesting venture for the band, predominately, “Don’t let me go” which I felt The Summer Set truly delivered a fantastic hit. I loved it; it was passionate, infectious and just a great piece of music.

Overall, I thought Everything’s Fine was decent. Certain elements of the album really hit the mark and others fell a little flat -absent of that extra oomph that was needed for it to be great. However, it is a good poppy, pop-punk album, and I’m sure it will still rake in fans on the infectious quality of The Summer Set alone.