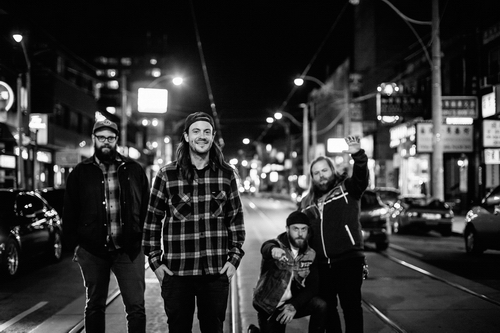 CANCER BATS have come to destroy. Fuelled by a burning desire to rage harder, play louder and have more fun than any other band, CANCER BATS mix hardcore, southern metal and punk rock into a lethal rock and roll explosion.

They’ve been ripping shows, banging their heads and partying to the new tunes of Searching For Zero and are set to return to Australia in September and October for their first club show tour in almost a decade.

Fifth studio album, Searching For Zero is a banger filled with hookier choruses, the screams more savage, the riffs more vicious and the songs more powerful. Nowhere is that more evident than a CANCER BATS show, where band, fans, and unsuspecting bystanders unite under a banner of raised fists and banging heads. The energy is as undeniably infectious as the music itself and has helped the band hold its own on club and festival stages around the world.

“These guys own the stage like many bands simply cannot manage, and it makes for a hell of a show…” – leedsfestival.com

“…Cancer Bats are just a near perfect live band” – Ramblings About…

What better way to celebrate than to bring along Melbourne’s heavy punk overlords HIGH TENSION along for what promises to be an insanely kick ass live show with plenty of riffage and chops. HIGH TENSION have just released their highly anticipated ripper 2nd album Bully and one to add to your top albums of the year.

Throw your moshing shoes on, practice your hair windmills, grab a tinnie and head down to a show near you because with ticket prices at $25 + bf, these tickets won’t last long! Don’t say we didn’t warn ya.

Tickets on sale now from tickets.destroyalllines.com
All tickets $25 + bf 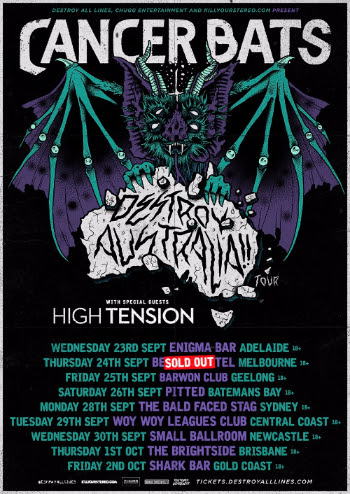