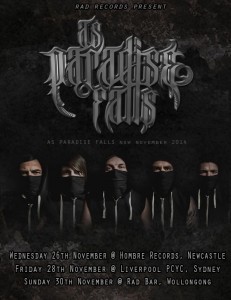 Hailing from the sunny suburbs of Brisbane, Queensland, this act is one you definitely do not want to miss. As Paradise Falls played their first gig in 2010 and since, have been working hard to rise above the local music scene masses. They are a band that has earned every opportunity through sheer dedication and perseverance. Combining their love of mainstay hardcore and metal bands such as August Burns Red, I Killed The Prom Queen, Whitechapel and more. As Paradise Falls are proving to be a favourite within the local music scene.

Feeding off the energy that is the band’s audience, As Paradise Falls have increased their stage performance and built a name for themselves as a tirelessly entertaining band. They are a stable part of the local all ages scene and frequently play with Brisbane’s largest emerging hardcore metal acts as well as supporting major acts like Make Them Suffer, First Blood and Attila. They also made their New Zealand debut in June 2014.

As Paradise Falls have just released an album Save Yourself on 15/10/14 as well as one of the most unique music videos from an underground Australian band.

Haunting and hypnotic riffing, dead lift breakdowns, angst ridden vocals and an absurd and psychotic stage presence; blend these ingredients together with a healthy dose of evolvement and you have the band Enfield.

Forming under their current moniker in March 2013, the 6 members of Enfield draw influences from a broad array of heavy music genres such as death metal, modern prog, deathcore and hardcore, which are all encompassed to create their own branded compositions. After only a short time, Enfield have managed to attract the attention of the local hardcore music scene throughout Australia.

The re-release of Arcadia:Exile through ‘Skull and Bones Records’ was available in stores and online from Friday September 5th 2014.

Be sure to catch them as they continue to mosh their way through the local music scene!

Adelaide and Perth fans can also catch AS PARADISE FALLS at one of their shows with international act, Molotov Solution, on the following dates: