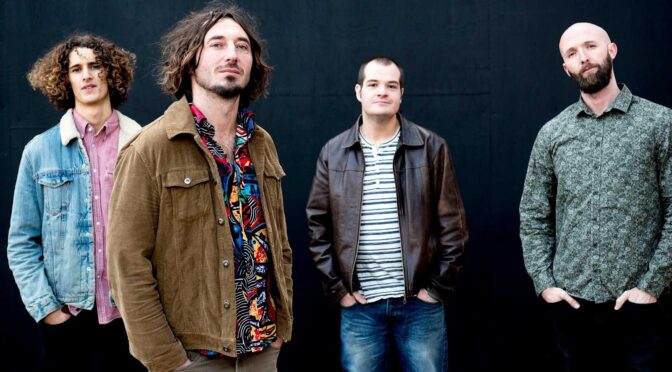 Wille and the Bandits are a British-based band from Cornwall who play a mix of different genres spanning across the Blues, Rock, Roots and Folk rock styles, with a somewhat epic overall effect that channels the monstrous riffs of Led Zeppelin and the atmospheric warmth and depth of Pink Floyd, but all the time seeing the band push the boundaries of sound and rhythm to create a dynamic and unique sonic experience that should appeal to a broad range of classic and contemporary rock music fans.

The band is now a four-piece and consists of Wille Edwards (Vocals & Guitars), Matthew Gallagher (Keyboards & Guitar), Harry Mackaill (Bass & Keys) and Tom Gilkes (Drums), and the new album, When The World Stood Still, has been written by the band collectively and produced and engineered by the band with John Cornfield.  This is the fifth album release, with a discography dating back to 2010 and their New Breed album.  The band has toured with the likes of Deep Purple, Status Quo, Joe Bonamassa, the John Butler Trio and Warren Haynes. In 2014 they were voted in the Top Ten bands to see at Glastonbury by BBC Radio 1.

The new album opens up with a track that epitomises the genre-straddling sound of the band – with huge fuzz-laden riffs, slide guitar lines and a huge drum sound that is immediately obvious.  Caught In The Middle is an immense track with the verses being a more stripped back roots-rap style over a mellow backing track, before the chorus erupts again with those guitars – what Wille called “an almost Rage Against The Machine guitar riff”!  The mid-section has some great arpeggios and accented riffs before a return to the wonderfully overblown chorus to close the song.

Next up is the epic 6 minutes 20 secs of I’m Alive, featuring multiple layers of instrumental and vocal harmonies, a bit of an eastern feel in parts, with some added percussion and white noise sections that enhance that, and some intense wailing vocals over the organ and heavily-fuzzed guitar line.  The track opens up with Wille and a slightly distorted vocal tone, over the band, which leads us on to the heavy blues-rock of the chorus.  The track is driven by the bass and drums of Harry Mackail and Tom Gilkes who maintains an impressive tempo and adds in heaps of clever fills and off-beat elements, and their presence in the mix is just perfect.

Without You takes some of the core elements of I’m Alive and exaggerates them into a dark, epic expression of lost love and despair, with a mix of truly heavy rock riffs, layers of organ and soaring slide guitars, and a deliberately sludgy lead vocal line that acts as just one of the multiple layers of sound through the track.  This is no ballad, but a deeply heavy and intense track that gets over the 8 minute mark, without ever appearing to be overlong.  The band has a breather mid-song, allowing Wille to deliver a hugely atmospheric slide solo over the solid bass line, and then the drums kick back in and the solo builds alongside the electric piano and organ, and the anguished wail of “Without You” that acts as a crescendo of a link to the chorus again, before the final segment of echoing guitars, voice and percussion that closes the track.

The new single, Good Stuff, is a much less complex blues-rocker, with bottleneck slide over a punchy groove, Hammond organ sound, and a catchy chorus, with some crowd-pleasing “Wooah Wooahs” to boot.  Wille has adopted the UK’s COVID catchphrase of In This Together to deliver a stinging critique of the political in-fighting and divisive impact of social media, with another distorted lead vocal in the verse, and some contrasting guitar tones over a backing driven along with the bouncing upbeat bass and drums, and a surprisingly uplifting chorus – which exaggerates the cynicism behind the words.

The band reverts to a southern-tinged rock sound for their lament to the loss of live music, Will We Ever, featuring Wille on Dobro and Lap Steel, and some great backing vocal harmonies over the wonderful organ layers, and a neat little time and key change, that brings The Cadillac 3 to mind.

The title track, When The World Stood Still is a massive change of feel, with the gentlest of organ and piano melodies from Matt Gallagher over a laid-back jazz backing of double-bass and drums, and Wille laying down a wonderful lead vocal line, and some wandering lead guitar lines from Wille on the Dobro.  The voice is right up front on this one, and Wille shows that he has a really impactful voice, both warm and full of melody and strength.

Another change of feel, and we have a funk-soul vibe right up front with Move Too Fast which illustrates just what a top-quality band we have here, and the superb song-writing that provides the multiple song-structures throughout the record.  There is a clarity to the guitar solo which really proves that less really is more, and the backing builds up throughout until it appears likely to explode, and after a loud pre-chorus we get another intermission of hip-hop style vocals over the solid beat and meandering guitars that leads to the abrupt end.  Broken Words is in something of the same funky style, using the voice as instrument again to add texture to the track.  The mid-section has a whole load of percussive elements, along with the voices, while the guitars lay down an ethereal layering over the top.

There is a feel of exuberance and joy in the positive power of Daylight, which was written for daughter number two, after Watch You Grow on the last album for his first daughter.  This is a great catchy pop-rock song, with a pure Led Zep middle-eight, all wailing vocals and heavy guitars over monster drums! The band is able to seamlessly switch between clean light segments into heavy sections without losing the core sound and feel, and this provides the consistency of the band’s sound.  This is again shown up by the up-tempo Refuge, another reflection on the failure of society and government to support music and the arts during the pandemic, and it has that feel of a 1970’s protest rock song about it too.

The album comes to a close with an exquisite 8-minute journey in Solid Ground, featuring the purest clean guitar sounds, “as if Peter Green had been transported back to planet earth”, over a slow jazz-blues backing, and some smouldering vocals that reveal a despondent view of the future of humanity, and contain a plea on behalf of the children to be able to walk on solid ground.

Wille Edwards is a supremely talented musician, and has pulled a bunch of guys together who clearly share the musical vision, despite their diverse backgrounds, and the writing and performance on this album deserves to see it put right up there alongside some of the all-time classic rock albums of our generation – every listen draws you further in and makes you hear something different, and some of this must be turned up LOUD to have the greatest impact.  This is a band that draws on some classic influences, and throws them into a melting pot to come up with something both unique and very special!

The band embark on their headline UK tour from March 4th to April 23rd.  Tickets are available from the band’s website.