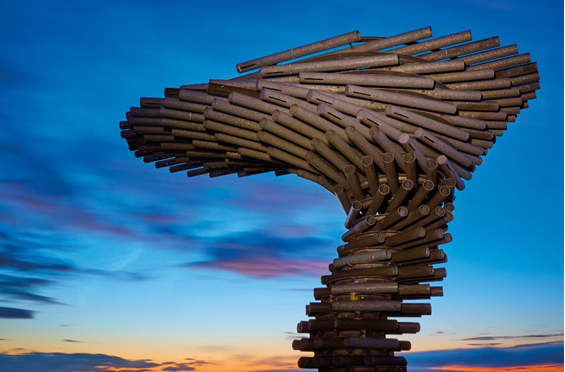 The band took a break after 2009, but came back fully energised in 2015 with the wonderful Wonder Days album, and since then we have seen both Rip It Up and the reprise album Please Remain Seated hit the mark with the same quality songwriting, consistent delivery, and self-deprecating attitude that has set Thunder apart from many of their peers, and has led to the longevity of their special relationship with the fans, old and new from 1989 to today.

So, what do we get with the 2021 album All The Right Noises? We get something that indisputably a Thunder album – a set of melodic blues-rock songs, a couple heavier, a couple of ballads, and with lyrics that are always worth really listening to!  We get some echoes of classic Thunder tracks, and we get a couple of eye-opening variations on the theme that prove the band has certainly not rested on any laurels or stuck to a formula.

Last One Out Turn Off The Lights is the perfect album-opener, with a gritty riff from Luke Morley / Ben Matthews, an uptempo drum-beat from “Harry” James, and a strangled howl from Danny Bowes to open the show – the melody is a cracker, the horn section adds to the warmth and the backing vocals are perfect, with an interesting middle-eight before the blistering solo from Luke – this is a Thunder crowd-pleaser through and through.

The next track, Destruction, has a darker side and this is where we see Danny and Luke steer the band slightly off the well-worn path, and we get a heavier beast, with massively heavy guitars, a grungy bass line from Chris Childs, and a menacing vocal from Danny.  The first part of the solo is gloomy and threatening, before the tasty fretwork to follow, and then those guitars crash back into the riff.  Throw in some female backing vocals to the fade-out and we end up with perhaps the most different Thunder track in years – awesome!

A gentler acoustic intro to The Smoking Gun, with a typical Danny lead vocal and thought-provoking lyrics, and a talkbox guitar solo, which slowly builds in intensity through the dual acoustic guitars, and assorted background percussion adding to the atmosphere.  Then it is right back into the party with first single Going To Sin City – which is among the finest examples of the band’s party rock anthems – “they got it all on show in this dirty town……bad boys, pretty boys strut their stuff….you can’t look away – you can’t get enough!”  You guys know how it goes!  The horn section again adds that extra dimension, and the backing vocals ramp it up some more.  A neat little solo, before another little middle-eight break, and then we roll back into the chorus.

Bass and kick drum provide the intro to Don’t Forget To Live Before You Die, with Danny singing through some distorter for the first verse, and then this deliberate chugging riff kicks in, with Harry smacking the kit in rock-solid Cozy Powell mode.  Mid-song Luke kicks off a double-time riff that leads in to another glorious solo, before we again get some different touches in the backing vocals that lead us down another offshoot of Thunder sound!

I’ll Be The One has a typical Thunder intro, with delicate piano beneath the impassioned vocals of the verse, and then the band joins in for a restrained soft-rock ballad that features what may be the slickest and tastiest solo on the record.  Another down and dirty riff hits us with Young Man, some more well-crafted lyrics, and a chorus that raises goosebumps!  The crowd-sourced backing shout of “Hey” is startling, and another example of the band’s lack of fear, and sense of adventure – compounded by the mid-section backing vocals.  The riff is insanely catchy, reminiscent of old-school British rock like The Troggs or The Kinks on steroids – I envisage some crowd-shenanigans when this one is rolled out live!

A straight-up Brit-rock track in You’re Gonna Be My Girl is next in line, and gets the head nodding and feet tapping from the start.  Bar-room boogie and honky-tonk piano, with some doo-wop backing vocals from the ladies which fills the soul with joy.  A vision of 10,000 people jumping up and down in time is vivid – hopefully to be experienced in 2022 live!

My guess is that there is a story behind St George’s Day – a wonderful Thunder ballad that harks back to the Backstreet Symphony days and Love Walked In!  An acoustic guitar work out leads into Force Of Nature before the energy kicks up with the main riff under the second verse, and you just know that the band is seconds away from piling in to crash the place.  Some sensational off-beat drumming to match the choppy riffs, while Danny wails away over the top.  A wonderfully discordant middle-eight provides a great counter to the straight ahead verse-chorus structure, and then another break before the short but sweet solo.

And here we are at the end of the record, with a typical, up-beat rocker in She’s A Millionairess, which shows just what a wonderfully reliable band Thunder have become in the past 10 years – Luke continues to roll out riff after catchy riff, while Danny sings like a young Paul Rodgers and dances like no-one’s watching! Ben plays a blinder as second guitarist, while Harry and Chris set the backbone in the most reliable and solid fashion.

As a die-hard fan, Thunder cannot do much wrong in my eyes, but to be able to surprise and delight yet again on studio album #14 (I think), while delivering another superb set of songs, and a couple of jaw-dropping moments that should make the youngsters in the NWOCR bands sit up and take serious notice of the old codgers!   All The Right Noises is a very appropriate title!  Roll on May 2022 in the UK if I can swing it, and perhaps the June weekend in Japan might be a closer option!

Listen to the most recent single released from the album, ‘Going to Sin City’,

or Last One Out Turn Off The Lights,

Thunder have announced an online TV special, where they will exclusively perform tracks from their forthcoming album ‘All The Right Noises’, as well as some of their classic hits from years gone by.  The show will take place at 6:00am on Sunday, March 14 AEDT and will be streamed for 48 hours afterwards, enabling ticket buyers to watch as many times as they like during that period.

The live studio performance will be filmed with adherence to Covid-19 restrictions, and will feature collaborators who played and sang on ‘All The Right Noises’.

Singer, Danny Bowes says of the forthcoming show, “As soon as we made the announcement to move our arena shows back to 2022, we decided we can’t wait until then to play the new tunes. Fans have been asking us for a streamed gig since the first lock down began, but we’ve resisted until now, because it can’t be a proper Thunder live show without them in the room. The format we’ve come up with will involve our fan club members via video for some of it, so they’ll see us performing, and get to ask us questions too. It’s not the same as a live show, but it’s not meant to be. When the show goes out, we’re hoping it’ll feel less like a gig, and more like a TV show, with us playing these brilliant new tunes, and loads of screaming nutters in their front rooms.
What can go wrong? For tickets & full info on how to watch, visit: https://thunderband.lnk.to/TVspecialPR