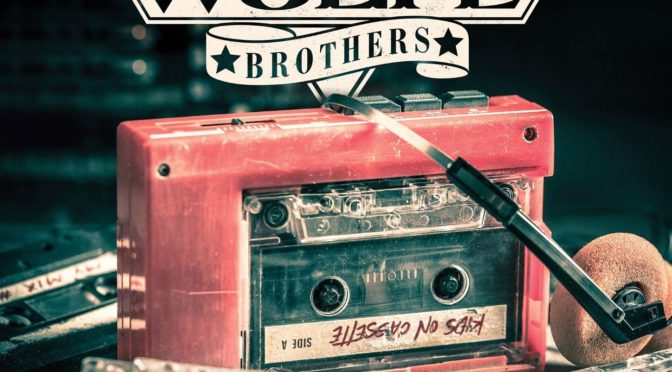 The Wolfe Brothers have earned themselves a solid reputation for their catchy singles and dynamic live shows, as well as their stellar work with Lee Kernaghan.

They have come a very long way since those Australia’s Got Talent days nearly 10 years ago, and constantly push the envelope with their songwriting, and delight fans with their honest approach – which they seem to live in every aspect.

Now, the band are gearing up for the release of their fifth studio album, Kids On Cassette – their first international release through music juggernaut BBR / BMG – and it is a party from start to finish.  Harking back to their origins, way back to the 80’s, and 90’s, the boys have embraced the vibe of the music they grew up with, and it is a pure delight for the listener.

The album covers a broad range of country music, from the super-polished and potentially massive radio-friendly sound of Start Something, with US duo LoCash which is just glorious, to the home-grown heartland vibe of Small Town Song, which is as Aussie as you can get!  The album has a few familiar tracks on it, with No Brakes and Anybody Ever having been released as singles, as well as the LoCash collaboration which is the most recent release.

The album opens with the title track, a nostalgic look back to those late 1980’s days when “life was a walk, man, and we were just kids on cassette”.  The track motors along as an anthemic jam, driven by upbeat drums and a hypnotic synth-like melody, with soaring vocal harmonies that could be an out-take from recent Keith Urban sessions.  Anybody Ever shows just what a great singer Nick Wolfe has become, with an easy, relaxed delivery in the verses, some quality backing harmonies and an all-round quality vocal arrangement that has more echoes of great 1980’s pop – as well as a tasty little guitar lick.

The LoCash connection is instant, and Start Something has so much to love about it – enormous harmonies, some low-down drawl, a real guitar solo, and a fun mid-section before the band storms back in with what should become a summer anthem for Australians as we emerge from the COVID-era with some hope of a return to a world when live music, festivals and sweaty club gigs are back on the agenda.  As Nick says, “the song is all about getting the party started, and from Tasmania to Nashville we know that’s a theme country music fans can get behind!”.

The band stays at least half-way across the ocean with the excellent No Brakes, written and produced with Lindsay Rimes, which got to #1 in the Country Charts in May last year.  This is another positive country-rocker with hit written all over it, and puts the band right up there once again.  A different sound hits us next with the fun Something Good’s Gonna Happen, featuring Amy Sheppard from the indie-pop band featuring her name.

Teaming up with one of their heroes in Jack Jones, from Aussie southern rock band Southern Sons, the boys deliver an absolute belter of the perfect fusion of country rock – both Aussie dirt and US steel, in Down Time, with that real INXS feel in the rhythm, which has some wonderful guitar-playing, particularly in the atmospheric mid-section, a blistering guitar solo from Jack – perhaps my favourite track on the album.  All class and quality, with a bit less of the US Country Radio polish, and this one destined to be an absolute stormer live.

There is a drop in tempo, and a shift to a less bubbly sound, with the achingly heartfelt Soundtrack to an Endless Summer written over Zoom with Texas-based songwriter Drew Kennedy (currently writing for Raelynn, Walt Wilkins and Mason Lively among many others) – this is The Wolfe Brothers coming of age, a wonderful and emotional song that has the raw emotion of a summer love story that burned out, and is as real and honest as it comes.   What You Make It is a classic Wolfe Brothers country ballad, all acoustic guitars and a great vocal harmony between Nick and brother Tom.  The inclusion of the bagpipes gives a real Celtic feel to the track, which is backed up by the drums and percussion that sits underneath the guitars.

That same lilting beat allows Small Town Song to flow sweetly along, and the more you listen to the lyrics, the warmer you feel!  Home Without You has some dextrous banjo playing over the snare-driven beat, and another quality arrangement that sees so much going on behind the main melody, including another ripping little solo to the close.  The tempo drops right back down to the intro of She’s Everything, before the stadium-rock chorus erupts, and the lighters fill the air!  This song has been around a while, written in 2016, but missed out on the previous albums.  Nick’s voice is clear and powerful, the guitar-work is stellar, and the whole package just highlights the maturity of the band – what a time to deliver a record this good, as your first international release!

All in all this is a joyous record – a statement that transcends the frankly unbelievable past 18 months, and the whole thing is summed up in the closing track, Time To Be Alive which has all the hallmarks of a Wolfe Brothers standard, with that folk-rock backbeat and hustle, but with the extra dimension of sophisticated harmonies and superb production that puts this right up there among the superstars of the ‘modern’ country world – and provides a real trans-Pacific feel to stand alongside some of the giants of Country-Rock, like Old Dominion, Morgan Evans, Luke Bryan and Hardy, without losing the Tassie grit they grew up with.