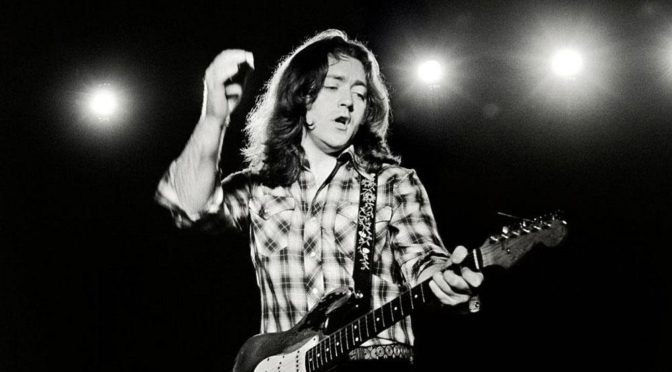 I saw Rory play live back in 1982 and was lucky enough to get to go an interview him in his dressing room before the show – he made a very nervous and inexperienced interviewer feel right at home – and then delivered 2 hours of astonishing blues rock.  As Brian May said of him – “He was just a magician, he’s one of the very few people of that time who could make his guitar do anything it seemed. It just seemed to be magic. I remember looking at that battered Stratocaster and thinking “how does that come out of there?”  That 1961 Stratocaster was bought for 100 pounds in 1963!

There was another collection released in 2007 that included lots of the classics and a bunch of live versions, and that has been a regular on play and repeat for me, and it is fantastic to see this collection of all studio tracks from 1969 through to 1990 released under one cover.

There is a superb consistency and timelessness inherent in the material, from the opening riff of Taste’s What’s Going On which clearly shows that once Rory found his particular sound and style with that blues power-trio in 1968, this proved the formula he followed.  The other three Taste tracks are scattered through the record, including the heavy blues of Catfish that closed the package, the classic rock powerchords of Blister On The Moon, very like The Who, with some dextrous guitar work over the drums.  Slightly left-field is the complex jazz-rock workout of It’s Happened before, It’ll Happen Again, which lets the band roam free under the lead guitar ramblings.

Interestingly the compilers have not chosen to follow any chronology in the set, opening with the classic Shadow Play and nearly closing with the other classic Moonchild, both of which provide fitting bookends to the collection.  The opening riff is just such a simple one, with the solid bassline of long-time bandmate Gerry McAvoy and Ted McKenna on the drums on their first release as what many regards as being the classic line-up.  Rory’s vocals are a loose brogue/drawl and are the perfect accompaniment to the very recognisable guitar sound.

Follow Me features the same line-up, and is a full-throttle rocker that reminds me of plenty of later tracks from bands like UFO and Whitesnake, and sees Rory absolutely let rip in the solo.   Another driving number in Tattoo’d Lady from the earlier period when Lou Martin added an extra dimension on the keyboards, and the electric piano here gives the track a bit more depth.  Some Delta Blues and slide guitar on an arrangement of Bo Carter’s All Around Man is a real look back to one of the key influences of Rory’s style, and is given a really good workout.

The album features some lesser-known tracks like the mellow I Fall Apart from the first album, and the timeless Daughter of The Everglades from Blueprint, before the superb title track from the 1976 Calling Card album which is about as Blues as it gets, and was co-produced by Roger Glover.  This features some inspired piano from Lou Martin and a series of searing and intricate guitar licks.  The second half of CD1 includes three tracks from Deuce (1971) which highlight the raw almost live feel of that record, with the Spanish guitar feel of I’m Not Awake Yet, the Celtic  Bluegrass lilt of Out Of My Mind and the aggressive sonic maelstrom of Crest Of A Wave which remains one of the finest of all Gallagher’s works with the piercing guitar lines.

Tucked in amongst these three are Just The Smile, Edged in Blue and one of my all-time favourite riffs from anyone, Philby, with the return to a more Blues Rock feel on the Top Priority album.  The underlying riff is just incessant, and the lead lines just wonderful, and an electric sitar borrowed from Pete Townshend was used to bring an ‘eastern-bloc’ feel to the solo. The vocals on this track are some of the best Rory has delivered.

CD2 opens with two more absolute gems in Bad Penny which really continues the sound and feel from Philby, with a wonderful harmony guitar section following the main melody of the song, and the 7 minute opus of Walk on Hot Coals with the trademark Gallagher guitar sound and stuttering, shuffling riff that has its origins in skiffle more than blues, featuring the new drummer Rod de’Ath and more great piano from Lou Martin.

We jump ahead 14 years to another shuffling riff in Loanshark Blues from the Defender album before the superbly catchy melody of Bought & Sold, and the powerful A Million Miles Away, both of which are superb examples of how the best power-trio’s work, with the bass and drums of McEvoy and McKenna providing the most solid backbone to the track, while the frontman provides the delicate riff, powerchords and searing lead breaks that populate this track.  There is additional warmth and depth provided by the keyboards and horn section here, and the song builds and builds through to the climactic final 90 seconds when the whole band is just on fire.

Wheels Within Wheels comes from the Notes from San Franciso album recorded in 1977 and not released until 2011 as Rory was unhappy with how it all turned out.  This was a watershed moment as he fired the band, re-formed as a trio with McEvoy and McKenna, and re-recorded most of the songs, but not this one, to release as Photo-Finish.  Seven Days is a wonderful acoustic blues number perfectly suited to Gallagher’s raw vocal style, and sees him display his skills on the harmonica as well as the steel guitar.

There is just one track here from Fresh Evidence, Rory’s last studio album, and Ghost Blues really symbolises how much influence Rory took from the great blues artists like Son House, Muddy Waters and Robert Johnson, and this features a variety of guitar styles from Blues to Zydeco and features Mark Feltham from Nine Below Zero on harmonica.  The track runs to 8 minutes, and allows the band to explore the melody while the beat keeps driving on, and sees Rory deliver lead break after lead break.   Cruise On Out is a full-speed blues rocker that features that familiar shuffling beat, and is more of a solo than a song, seeing Gallagher just ripping throughout the track.

The duet with Jerry Lee Lewis was an outtake from The Killer’s London Sessions record is a steadier more direct version of the Stones’ classic, with Gallagher playing guitar and singing, and has curiosity value in spades.  The two sound like they had a blast in the studio, and features way more guitar than piano.  There is a real jazz feel to They Don’t Make Them Like You Anymore from Tattoo with the addition of a Bouzouki, showing how broad Rory’s talents were for all things stringed, and not just the electric guitar.

Moonchild follows with its familiar riff, and a warmer vocal delivery than was often the case, and this one really stands the test of time with what for 1976 would have seemed a powerful blues number, with multiple layers of guitars and keyboards providing that wall of sound.  This is a Gallagher classic, with the driving riff, and the searing solo that forms the fade-out.  There is only one track from 1982’s Jinx as well, being Jinxed, a sensational showcase for the guitar-playing, over a sizzling samba beat, before reverting to a more standard 4/4 beat for the straight-up blues solo!

There a few classics missing from this superb collection, but this really is a Best Of is every sense of the word, without much in the way of out-takes or unreleased fillers, so for most Rory Gallagher fans there is not much new here – however it really does pull the majority of the man’s full musical career into one place, demonstrating not only the quality of the guitar-playing, but the song-writing too, with almost all of the tracks written by Rory alone.

AVAILABLE TO PRE-ORDER FROM https://RoryGallagher.lnk.to/TheBestOfPR