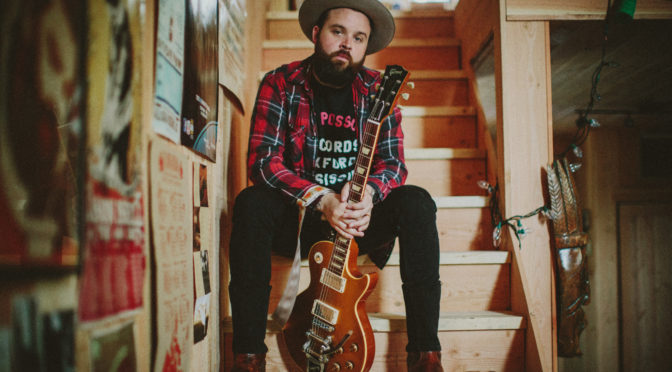 Canadian artist Leeroy Stagger’s name might not ring too many bells with Australian music lovers, but hopefully that situation is about to change with the release of his latest album, Strange Path – released on Sept 13th through True North Records / MGM. Despite the lack of familiarity, Leeroy has so far released 11 albums, 2 EPs and has 17 years as a singer-songwriter under his belt which has seen him develop a reputation as a masterful lyricist and exciting performer, garnering a strong following in his homeland, while also making inroads into both the UK and US in recent years.

I have listened to this album a dozen times in the past couple of weeks and am still completely stumped as to how to classify Leeroy – which certainly means he provides a widely eclectic variety of electric folk, blues and Americana blended with some pop sounds and punk attitude thrown in for good measure.

Opening track on the CD is Mother, which has an earthy feel to vocals of this gently rolling ballad with vocals that bring Paul Simon to mind, a comparison which keeps popping up through the album, and shows a delicate and fragile guitar-style through the strumming and picking.

Deeper Well kicks off with some guitar wails, and then rolls along like a country rock driving song, with the vocals and guitar line bringing back Dire Straits memories from their heyday, and shows off the tight crisp drumming of one Pete Thomas (Elvis Costello and Los Lobos) behind the kit.

Next track and another change of feel, with Breaking News having much more of an an early Brit-Pop vibe in the beat and guitar melody from my hearing, with an electro-pop intro over the drums and a real ear-worm of a guitar hook-line, and a completely difference vocal sound from Leeroy on this one.

With its very retro T-Rex / Lenny Kravitz glam-rock feel, Strange Attractor the first single from Strange Path might not be what you expect from an artist normally referred to as a roots rocker, and it’s precisely this willingness to take chances that makes Leeroy Stagger an artist worth investigating.

Describing the song, Leeroy says “Nothing is permanent when you really stop and think. The home we live in, the car we drive, the children we raise, the art we make and the skin that we’re in. It’s not forever, it’s barely real, and that’s ok to me because I’ve been shown the truth of it all. In seeing that it’s not that big of a deal, this has shown me how beautiful it all is. It’s precious, impermanent and beautiful. ‘Strange Attractor’ is about the unseen nature of impermanence and the sacredness of the life we live.”

There is a sleepy and hypnotic feel to the beautiful ballad Nobody Alive (Gets Out of Here), and then another complete change of vibe with the driving bass-line from Tyson Maiko under-pinning the grungy keyboards and riffs of Jesus & Buddha – part indie-rocker, part glam-rock with a gritty early-Clash Joe Strummer vibe in the raucous spat-out vocals, and a chaos in the drum, synth and guitar accents in the middle-eight.

A much simpler guitar line supports the plaintiff vocals of These Things, another mellow ballad that gets a bit of drive from the snare drum, and has multiple layers of guitars and keyboards behind the vocals, with some added backing “Woo-Hoos” from the crew. There is a wonderful guitar solo here too that lead into the final verse and chorus.

Hey Hey! (Song for Gord) also has a world-music feel and Leeroy delivers the vocals in a Paul Simon / Bruce Springsteen vein, over a rolling piano melody and with some beautiful guitar work, interspersed this time with some cheery “Hey Heys” from the backing singers – a suitably up-beat tribute to the late Gord Downie, frontman of Canadian alt-rock band The Tragically Hip.

A very haunting off-key opening to Leonard Cohen (is Dead) with the vocals delivered very much in LC style, and then we get a fully-layered blues workout in Get To Love with a wonderfully distorted and reverb-heavy guitar sound, and perhaps the best vocal delivery on the record.

The album closer is perhaps the culmination of the journey Leeroy has taken over the past few years, through anxiety and depression, as well as something of a musical odyssey straining to reach The Light.

The only thing I can add is that you need to listen to the record yourself and work out whether you like it or not – it is impossible to pigeonhole, and does not fall into any of my normal musical genres……but there is an honesty about the songwriting and the performance, and so much going on in the depths of each song, that it is album to be listened to and enjoyed many more times.