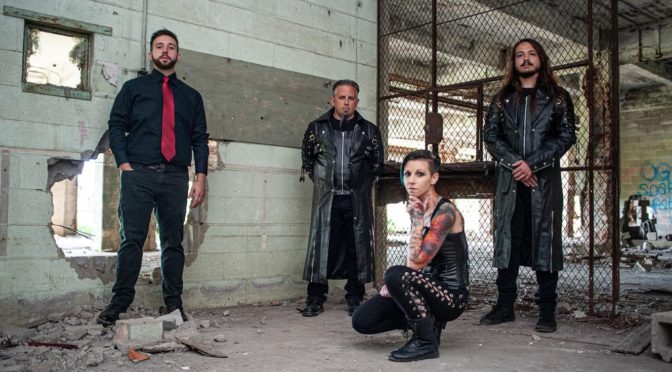 An edgy hard rock band from Buffalo, NY, and with the terrific name Hearts & Hand Grenades was initially a cover band, until spotted by Goo Goo Dolls vocalist Robby Takac who invited them for a session at his studios – which pushed the band into writing some original material, which they did then record and released as the Wait EP in July 2019.

Roll forward a few months and the band has more material, and Justin Rose (GGD’s producer) took the reigns for another recording session which has resulted in the material for the debut album, which will be one of the first releases in 2021, from Eclipse Records.

There is more than enough in the 8 tracks on offer here to get interested in – chunky riffs, infectious grooves, catchy choruses and loads of energy, all topped off with the powerful and melodic vocals of the undeniable focal point of the band, Stephanie Wlosinski, who comes across as a cross between Taylor Momsen and Lzzy Hale, delivered with a post-punk sneer that really fits with the music.

Album opener and title track Turning To Ashes leaps out of the starting gate at speed, and Stephanie delivers a supreme lead vocal melody over the powerful guitars, and we get a short sharp solo from Kenny Blesy before the slight drop in pace for the preface to the closing raucous chorus which sees the vocal line go round and round in a clever and effective way.  For The Weakened may be the heaviest track on the record, with a deliberate and crushing riff, over which Stephanie delivers a powerful lyric, ranging from purity to rough hardcore vocals – and I get the impression that the band will be an awesome live package.

Daggers is faster, punkier and edgier, and has a wonderfully catchy melodic hook in the chorus, and has a frenetic solo that leads into a powerful middle-eight which sees Stephanie on bass and Tom Lafferty on the drums deliver a powerful punch.  After these three slabs of riff-heavy rock, I Hide opens up with some haunting harmonies over a simple guitar line in the verse, that morphs into an up-tempo chorus which doesn’t quite tie the two together – before it all comes together with the solo, before that ethereal voice takes over again for the final stripped-back verse.

There is another catchy melody in the driving rocker Adrenaline, all guitars and the snarling wail of the vocals, which leads neatly into Nothing Left, which has a similar underlying riff, but a tasty little guitar lick, and the best vocal performance on the album, with Stephanie using every inch of her voice to slide up and down into the melody, and deliver a really intense and effective sound.  This is highlighted in the bass / vocal verse that explodes into life with the closing choruses.

Complete change of pace and feel arrives next with The In Crowd – which is more David Lee Roth in the bluesy bar-room verses, and Blink 182 in the frantic double-speed chorus, which you can just imagine sees a crowd go completely ape in the club as the band kicks into it.

The record closed with My Sickness, which has a darker grunge to the riff that complements the vocals well, and while the chords are familiar, there is a catchy element to the chorus that is really appealing, and the two guitars work off each other really effectively.

The experience and commercial talents of producer Justin Rose may well have had a major impact on the end-product here – with his influence perhaps overpowering some of the natural rawness of the band and softening too many of the harder edges and grooves of the band.  On the other hand he may have added a degree of commercial sound that will make the band more accessible.

Video – The In Crowd : https://youtu.be/TXcNCRDWQAA