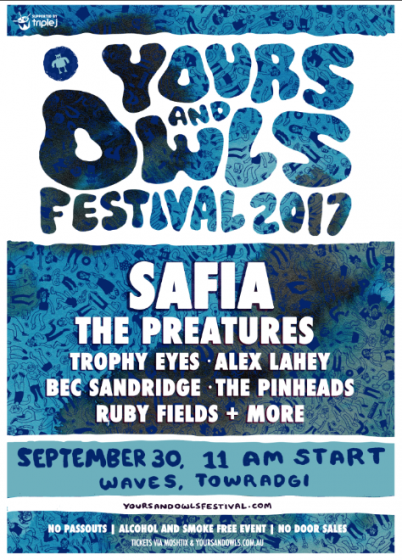 Yours & Owls Festival today announce they are giving the big ol’ finger to adulthood by chucking one epic party at Waves on Saturday September 30 kicking off at 11am for all the babes out there not quite old enough for an 18+ card……because why should adults have all the fun?! Stealing some of the best artists from the Yours & Owls line-up to party for the day, tickets go on sale Friday June 2 so get in quick, this is one U18’s rager you won’t want to miss out on!

Third and FINAL release tickets for Yours & Owls 18+ Festival are also selling like bloody hotcakes so if you don’t want to miss out on the hottest ticket in town you better get your ticket fast! They won’t be around for much longer…..

Three-piece electronica, indie/pop band SAFIA have been “ones to watch” since they first formed, having supported Lorde and Disclosure, and played coveted slots at Groovin the Moo, Field Day, Splendour in the Grass, Falls Festival, The Great Escape (UK), Primavera Festival (ESP), and SXSW (US). Sitting at over 20 Million online streams, landing high rotation with six singles at triple j and placing in triple j’s Hottest 100 three consecutive years in a row, who would have thought this trio only just released their debut album Internal late last year! Lead singles, ‘Make Them Wheels Roll’ and ‘Over You’ have seen them clock over 9 million streams on Spotify on those two tracks alone.

The Preatures burst onto the scene with lead single ‘Is This How You Feel’, which catapulted them both locally and internationally. With two acclaimed EPs to their name, sold out Australian tours and a ton of buzz thanks to blistering showcases at CMJ & SXSW in the US, the band went on to release their highly anticipated LP Blue Planet Eyes. Landing themselves spots at Glastonbury, Coachella, Bonnarroo and Jimmy Kimmy Live, The Preatures will be coming in hot with their hip-hugging baselines and choruses, so get ready to pop along to the delicious grooves of tracks ‘I Know A Girl’ and ‘Somebody’s Talking’

Trophy Eyes have had an epic five months since they released their acclaimed new album Chemical Miracle, which debuted at #8 on the ARIA Album Chart and has been lauded for its raw emotion, depth of introspection and courage. Backing it up with a chill-inducing set at UNIFY 2017, selling out their biggest Australian headline tour to date, the demand for the boys from Newcastle was so strong that half the tour sold out two months in advance. Getting the taste for packed audiences and sold out venues, they are bringing their wildly successful album to Y & O’s, performing mammoth tracks ‘Chlorine Eyes’ and ‘Breathe You In’

Selling her beloved 1999 Corolla to fund her debut B-Grade University EP, Alex Lahey firmly secured herself as one of the most talked about newcomers of 2016. Embracing a simple, homespun story-telling style, the music industry was set abuzz with the insanely catchy ‘You Don’t Think You Like People Like Me’, getting the nod of approval from Pitchfork, picking up adds across triple j, triple j unearthed and Fbi and finally winning the ‘Best Female Artist’ category at The Age Music Victoria Awards. Securing slots at Blurst of Times, Groovin the Moo and the Big Pineapple festivals this year, Alex Lahey will be bringing her guitar-driven hooks and fuzzed-out sound straight to the stage at this year’s Yours & Owls.

Nomadic pop-punk logo-maniac Bec Sandridge will be hitting the stage at the Yours & Owls festival once again, with her star-status rising each and every year. With a guitar swagger reminiscent of St. Vincent, and the delivery of new wave icons like Deborah Harry and David Byrne, 2017 has already been off to a cracking start. Her latest hit ‘High Tide’ landed high rotation on triple j, with Bec taking to the j studios to put her own little twist on Australia’s other national anthem ‘You’re The Voice’. With a myriad of shows under her belt, including support slots for The Rubens, Montaigne and Highasakite, and appearances at Secret Garden Festival, The Hills Are Alive and Groovin’ The Moo, watch in awe as this boss lady takes to the stage.

Illawarra locals The Pinheads are bringing back their notoriously raucous, wild screaming live show to the ‘gong (because you know you just couldn’t get enough last year), but this time they are coming in hot with their brand new debut album to sink your teeth into. Unleashing their fury and igniting your loins with first single ‘Gimme Back’, you won’t know whether to run, dance or scream. Well on the way to becoming seasoned road hogs, The Pinheads have toured and shared the stage with King Gizzard, Fat White Family, Tumbleweed, Tomorrow’s Tulips, Hockey Dad, Drunk Mums and Skegss.

Within 24 hours of uploading her debut single ‘I Want’ on to the triple j unearthed site, Sydney songwriter Ruby Fields had already copped a whopping 30,000 views and is already drawing comparisons to Ali Barter. Pegged as a one to watch, with only one single under her belt, she made her festival debut performance at the Blurst of Times Festival.

A big thank you to our sponsor family, including; Destination NSW, Destination Wollongong and Win TV

Tickets on sale on Friday 2nd of June via moshtix

Yours and Owls 18+ FINAL release tickets on sale NOW
via moshtix & www.yoursandowlsfestival.com