Los Angeles’ rock outfit Tombstones in Their Eyes have announced the upcoming ‘Fear’ EP, to be released via Send Me Your Head Records. To wet your appetite, the band presents the first single, with accompanying video, for ‘Always There’.

With this five-track release, the four-piece manage to embrace a wide range of influences, from the stoner rock of Kyuss to the warped neo- psychedelia of the likes of Spacemen 3 to the cavernous and doom-laden sounds of Electric Wizard and beyond.

The band began life as a demo swapping exercise between John Treanor in L.A. and his childhood friend James Cooper, now in New York, but soon coalesced into a full fledged band. But collectives are always more than what you see on the surface. In John’s case, writing and performing songs is also a way of dealing with severe anxiety and depression, a way of talking about the subject without being the centre of the conversation, and a way of being subliminal rather than direct.

While such a starting point could easily see the music devolve into melancholy and self-absorption, here Tombstones in Their Eyes instead manage to move beyond that place and create music laced with celestial grandeur and a fuzzed out psychedelic majesty that looks out into the universe just as much as it looks inward toward the soul.

This music is also designed to connect rather than be insular. As Treanor says, “Everybody goes through hard periods in their life, and I hope that these songs make them feel less alone.”

Tombstones create walls of sound, which are simultaneously sonorous and hazy. These are cavernous, stoner lullabies that descend into post-rock soundscapes and are wrapped in dark shoegazing dreamscapes. 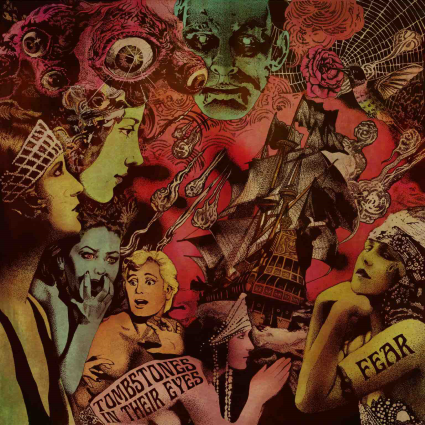