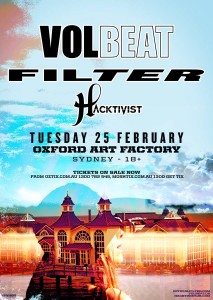 After being catapulted into the spotlight following an invitation to tour with Metallica in 2009, their fifth album has done nothing to stop the band’s ever-growing domination of the genre. VOLBEAT has been touring worldwide, taking inspiration from death, the dark arts and other terrifying and controversial experiences, and is finally bring its highly acclaimed live show to Aussie fans. Join the creators behind Denmark’s #1 rock album on a journey through mysterious and sinister territories on Outlaw Gentlemen & Shady Ladies. Rich stories laden with fictional characters such as outlaws and erotic dancers interweave between the tracks of VOLBEAT’S latest offering, all the while encompassing their signature rebellious spirit of metal, rockabilly and country and western.

“It’s a fantastic blend of thrashing guitars, mournful freight-train harmonicas and Ennio Morricone moments that wouldn’t have been out of place in a 1960s Clint Eastwood spaghetti western.” – Metal Underground

Shoving a fist in the face of tradition has been FILTER’S modus operandi since the release of their self-produced debut album, Short Bus. Richard Patrick, FILTER’S magnetic, profoundly intelligent nucleus and frontman jubilantly admits that his creative process is unorthodox, whether he’s staring down and conquering new technology or coalescing with new bandmate and co-conspirator Jonny Radtke on Filter’s current release, The Sun Comes Out Tonight.

“Without a doubt this is a new masterpiece for Filter and die-hard fans will not be disappointed. Everything you ever wanted from a Filter album is right here” – Cryptic Rock

“To progress, risk comes before reward, and convention must give way to invention.” This motto, by which outspoken 5-piece band HACKTIVIST makes music, has become a self-fulfilling prophecy as the world bares witness to a new path in music being carved. The evolution into a new age has become undeniably apparent, as this British band combines devastatingly huge beats with intelligent, insightful lyrics, covering politically driven messages from gun-control to anarchism. Forever pushing the boundaries, HACKTIVIST’S live shows offer everything from soul-crushingly dark bass to other worldly ambient walls of sound. Combining rock, nu-metal, grime and hip hop, this perfect recipe has fans hooked and hungry for more.