Australia’s alt-rock queens The Beautiful Monument have announced they will be heading out on a headline tour around Australia in August to showcase their brand new album, I’m The Reaper (out June 28 via Greyscale Records). The Music has aptly declared, I’m The Reaper, as “a major contestant for heavy release of the year”, and these shows will prove exactly why.

The Beautiful Monument has also unveiled their next heart-wrenching single/video “Reaper”. Here frontwoman Lizi Blanco continues to explore her life thus far, as she reflects on her first experience of loss and the grief that follows in its wake. It’s a stark realisation of finality of death and how things will never be the same again. “Reaper” is signature The Beautiful Monument with its deeply pensive verses weaved together by soaring choruses that will stay with you long after the final note rings.

Lizi explains, “I’d never experienced loss until the 3rd of November 2016. I lost one of my closest friends, my future housemate and our manager. I never learnt true heartbreak until that day. My world stopped in its tracks. It felt like a sick dream. All of a sudden it hit me that I would never get to speak to him again, I would never see that proud dad look on his face when he saw us girls doing our thing on stage. I miss him a lot and two years on I still think about him every day and talk about him every chance I get.”

The Beautiful Monument’s second album, I’m The Reaper, is an exploration of life happening in stages of grief, redemption, growth and being. Everything happens in these stages and nothing is one dimensional. The Beautiful Monument have made it their purpose to express their experience of these stages through music, and to share those terrifying but all too familiar thoughts with the world.

Lyrically, these stages can be seen most obviously with the first single “Deceiver” which continues lyricist Lizi’s experiences of drug abuse within the home and, when she felt she had it figured out, she was thrown another curve ball, thus the stages of understanding continue. Elsewhere, The Beautiful Monument explore mental health, toxic relationships, loss and resolution. I’m The Reaper serves as a reminder that it’s okay not to be okay and you can overcome anything – if you’re willing.

“This record is strongly associated with a lot of the negative times in my life (the last two years especially) which ended up shaping me into the person I am today,” continues Lizi. “It’s a very personal record to me. That said, it doesn’t only focus on the negatives, but also the positive outcomes from these shitty situations – from my mental health, dealing with loss and then finding someone I adore and laying toxic relationships and situations to rest. It’s the reaping of I’m The Sin and the beginning of a new chapter.”

The stories within this album are brought to life by powerful hooks, moody grooves and a deceptively vibrant energy that earmarks I’m The Reaper to be one of the most memorable heavy albums of 2019. Expect to hear influences from PVRIS to A Day To Remember and throwbacks to the early ‘00s rock of Evanescence.

2019 has already seen the band move into a new stage as they announced their signing to Greyscale Records, slayed Download Festival, completed a wildly successful headline tour and scored some much deserved airplay on triple j. While a general understanding of what is to come has the band excited, it’s the unknown stages that they look forward to the most.

With special guests: Tapestry & The Comfort

TIX ON SALE NOW VIA OZTIX

Saturday August 10
A Day Of Clarity, ADELAIDE ** (The Beautiful Monument Only) 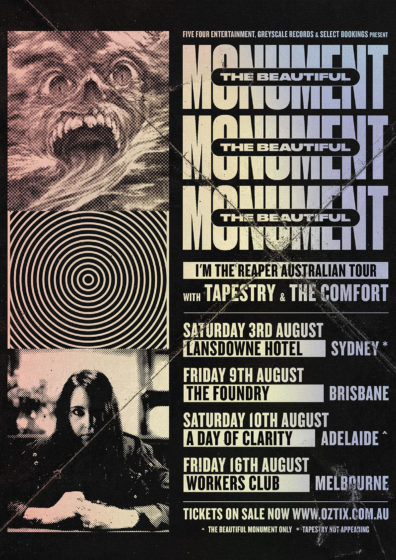