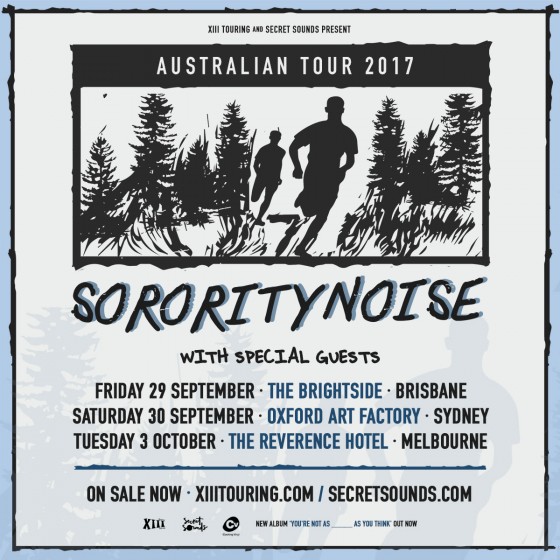 Connecticut-based quartet, Sorority Noise will be headlining shows in Brisbane, Sydney and Melbourne this September/October, following the announcement of their inclusion on the Yours And Ours Festival 2017 line-up.

Sorority Noise formed in 2013 and consists of Cameron Boucher (guitar/vocals), Adam Ackerman (guitar/vocals), Charlie Singer (drums) and Ryan McKenna (bass/vocals). You’re Not As _____ As You Think, their third album, is out now through Triple Crown Records/Cooking Vinyl Australia. The album follows previous releases It Kindly Stopped For Me 7” (2016), critically acclaimed Joy, Departed (2015) and debut Forgettable (2014).

Described as “the most collaborative, fully realized version of Sorority Noise to date,” the Mike Sapone-led project (Brand New, Taking Back Sunday) flows as a cathartic release, with the band embracing loss and darkness.

Sorority Noise current single No Halo has been receiving plenty of triple j play and along with tours with Modern Baseball, Citizen, Turnover and The Menzingers this is one of the most highly anticipated debut tours of 2017.

TICKETS ONSALE TUESDAY 16TH MAY 8.30AM