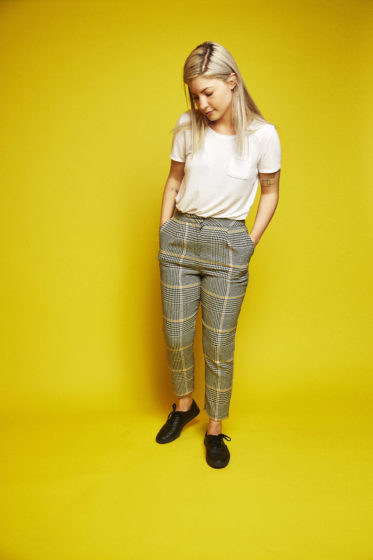 Mastered by Greg Calbi (Julien Baker, Arcade Fire, Big Thief), and co-produced by Taylor, most of “Interpersonal” was recorded in the dead of winter, in the basement of her friends house in Winnipeg. The EP is centred around her own personal experiences in mental health, with each song written sporadically over the last few years. “I chose to release these specific songs together because they all follow the theme of how our relationships with the people around us effect our mental health, and vice versa,” explains Taylor. “Regardless of the nature of our relationships (romantic, familial, mentors, friends etc), I think we are all way more effected by them than we think.”

Taylor had a religious upbringing in a small town outside of Winnipeg, attending a small school up until graduation. Her family and friends and those around her never talked to one another about difficult things they were experiencing in life, and if they ever needed help, they turned to religion for answers.

Unable to talk through her issues in mental health, Taylor turned to songwriting as an outlet and, as a result, with each song on “Interpersonal” we’re granted an intimate and almost painstakingly brazen glimpse into the most heart wrenching pages of her diary. She writes candidly, musing that, “the music that I write is very honest, so it speaks for itself.”

Her first track, “Stations,” is an honest and raw effort that aims to break the silence about abuse. Premiering on The Line of Best Fit and garnering praise from Jon Pareles of the NY Times, Taylor was adamant, even in the early stages of the EP’s development, that it would be the first song to be heard from “Interpersonal”. “I almost don’t really remember writing it because I kinda just emotionally puked it out..,” adding that, “I decided early on it would be the perfect first song to debut from the EP in hopes that someone may feel some solidarity through shared experience.”

She followed with “The Waiting Room,” an exasperated sigh that explores her frustrations with the stigma that surrounds mental health and was written after a particularly infuriating appointment at the doctors office. “It’s a conversation about what happens after you get help, because it’s something that desperately needs to be discussed,” she explains.

Despite brazenly tackling delicate subject matter, Taylor admits that initially, the idea of having others hear these songs was “incredibly intimidating.” She explains- “Colourblind” in particular was a song that I wrote last year and would always take off my set lists because I thought it would be too much for people. Then when I eventually worked up the nerve to play it at one of my shows, it ended up being the one that got the most reaction out of people. It’s so crazy to me how the scariest songs often end up being the most rewarding to play/release.”

“The thing is, my personality isn’t as depressing as my music is,” adds Taylor. Often tweeting about Dennis Quaid, her cat and the occasional Paramore cover (one of which went viral with 25k+ retweets and got the endorsement from Hayley Williams herself), every little thing Taylor shares with the world is magic, shining a light and finding beauty in even the darkest, and seemingly mundane moments.