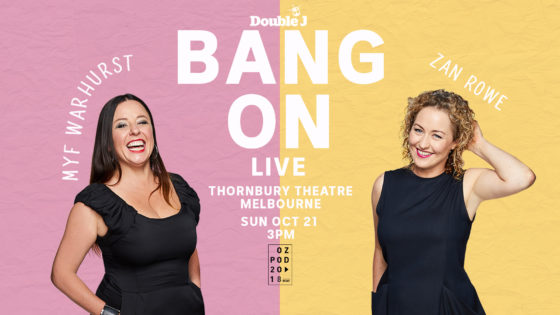 Double J’s BANG ON is heading to Melbourne for our first ever live show in the city!

Join co-hosts Zan Rowe & Myf Warhurst as they transform their weekly podcast for a live audience at Darebin’s Music Feast, hosted at the Thornbury Theatre on Sunday October 21. Now in its 22nd year, Darebin Music Feast encompass 120 events across 26 different venues, thoughtfully curated to showcase a diverse swathe of artists and musicians.

Zan & Myf say “Ever since we did our live show in Sydney last year as part of Yack Festival, people have been asking ‘When are you going to bring it to Melbourne?’. Now, we’ve finally been able to make it happen, and at a beautiful venue… We don’t want to spoil it, but let’s just say we have some very fun things planned.”

Watch all the action unfold from 3pm as they bang on about the week’s biggest stories in music, art, life and stuff. If it’s anything like Bang On Live in Sydney last November, it’ll bring the Bang Fam together from across the country for farshun, laughs and surprises galore. You can listen back here – http://www.abc.net.au/radio/programs/bangon/ep42-bonus/9260048

Special guests to be announced.

Myf and Zan will also be speaking at OzPod in Melbourne in October about all things Bang On. OzPod is the ABC’s Podcast Conference, a one-day event taking place in Melbourne on Wednesday 17 October at ACMI, Melbourne – book tickets at http://www.abc.net.au/events/ozpod/

Listen to Double J on the triple j app on your mobile, digital radio, on Channel 200 on your digital TV and online at doublej.net.au

Capping off an extraordinary year, brother / sister act ANGUS & JULIA STONE have taken out the much coveted ARIA Award in the category of ALBUM OF THE YEAR. With thirteen lovingly crafted songs reflecting a myriad of emotions, the album is Down the Way, which peaked at No. 1 on the ARIA Album Chart and has been an unstoppable force. ANGUS & JULIA STONE have also won the ARIA Award in the category of SINGLE OF THE YEAR for Big Jet Plane, a beautifully understated song with a dreamy string arrangement that has captured hearts. The siblings also won an ARIA Award on Friday night in the category of BEST ADULT ALTERNATIVE ALBUM and proving that their talent lies beyond writing and performing, ANGUS & JULIA STONE also won two ARIA Artisan Awards in September for PRODUCER OF THE YEAR and BEST COVER ART.
END_OF_DOCUMENT_TOKEN_TO_BE_REPLACED

Mark Lanegan took a detour from his Australian tour to play for the special 50th birthday celebrations for Andrew McGee, one of the founders of Shock Records. The place was hosted by Quincy McLean (Blue Ruin) and Helen Marcou at the famous Bakehouse Recording Studios in Richmond. The people were the who’s who of the Melbourne Music Scene, everybody from former Bad Seed, Mick Harvey, Myf Warhurst, Brian Hooper (Beasts Of Burbon) Mick Turner (Dirty Three), Julian Wu (Triffids), Bruce Milne (former Tote licencess), Paul Elliott (Polyester), Linda J, Bean & Gus of The Dacios, Penny Ikinger, Emily Ulman, Rui Pereira, James Young (Cherry Bar), Patrick Donovan (The Age) and lots more. The oriental theme was ENTER THE DRAGON with everybody dressed up as geishas, ninjas, grand masters, kill bill, etc. With 21 courses of food and amazing array of live music! Kicking off with Kim Salmon’s Precious Jules, known for inventing grunge with his former band, The Scientists. Following on was Joel Silbersher & The Baggage Handlers of GOD and Hoss fame. Headlining was international act, Mark Lanegan with David Rosser on guitar. To close off the splendid event, we had The Silver City Highway, while everybody danced the night away.
END_OF_DOCUMENT_TOKEN_TO_BE_REPLACED