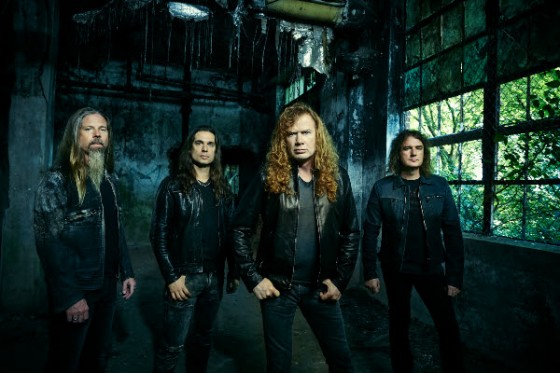 Thrash metal legends MEGADETH will return to Australia this October. Fresh out of the studio where they have been working industriously on their new album, the follow up to 2013’s Super Collider, Megadeth are eager to return to the live arena and Australia will graciously accommodate in Brisbane, Sydney, Melbourne and Perth.
END_OF_DOCUMENT_TOKEN_TO_BE_REPLACED

END_OF_DOCUMENT_TOKEN_TO_BE_REPLACED

Leading the charge for this historic event is seminal thrash-metal act MEGADETH, who will be performing their now-classic release RUST IN PEACE in its entirety! Those lucky enough to witness Mustaine and co in action when last here in 2009 will attest that Megadeth are in their career best form, making this a once in a lifetime experience you don’t want to miss!
END_OF_DOCUMENT_TOKEN_TO_BE_REPLACED

MA: Um well, putting it in perspective, the original idea came from the fans really, because the first three records that we made, the ones you just mentioned, were done with another singer. We had another bass player on two of them, so we didn’t have a stable line up on those first three albums, and it was a very different styled singer. But then Angela Joined for the fourth Album and with Sharlee on base and Daniel on drums, it was just a solid thing with me and by brother on Guitars and we started talking heavily about the fourth album, and that line up’s now how people know us. Over the years we talked and released our albums, and you know, well, this is the definitive line up of Arch Enemy, that we have right now, and the very early Albums have kind of dated into obscurity basically.
END_OF_DOCUMENT_TOKEN_TO_BE_REPLACED

“Sexy Bitch” from David Guetta (featuring Akon) reclaims number one on the ARIA Singles Chart this week, chalking up an impressive four weeks at the top and pushing Guy Sebastian‘s “Like It Like That” into second position. It’s the third song to return to the top of the singles chart this year, following Flo Rida‘s “Right Round” and Taylor Swift‘s “Love Story” which swapped positions several times in March/April. Muse makes a smashing entrance into the ARIA Album Chart, scoring a No.1 debut and their second chart-topping album with “The Resistance”. Their first was “Black Holes And Revelations”, which spent a week at the top in July 2006.
END_OF_DOCUMENT_TOKEN_TO_BE_REPLACED

Adelaide’s Double Dragon have scored the national support spot for the upcoming Slayer/Megadeth Australian tour. Shows are now sold out for Sydney at the Hordern Pavilion and Adelaide Thebarton Theatre. Others are selling fast so get in now to catch this classic double header!