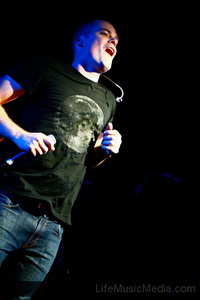 Tonight, The Trial Kennedy displayed a level of professionalism that made them the shining star of the night. Firstly, they had to temporarily replace their drummer due to the fact that their original drummer had contracted chicken pox a few days prior. The fill in drummer learnt an entire 45 minute set within one day which, was an amazing achievement given the structure of their songs. He powered Trial Kennedy through their set with 20 inch crashes and an Australian made drum set. Secondly, after their first song their bass amp blew up and had to be fixed on stage before they could proceed. In the interim, their vocalist proceeded with an acoustic song until the amp could be fixed and they could proceed. Even with a shorten set; Trial Kennedy worked their every bit of energy to showcase their music. These guys are in the process of recording their second release and this should see them headline their own set of shows in the not so distant future.

END_OF_DOCUMENT_TOKEN_TO_BE_REPLACED

How can I be in the running to get a double-pass for free?
END_OF_DOCUMENT_TOKEN_TO_BE_REPLACED

**** Click here for details of our double pass ticket giveaway! ****

Sunday of the Labour Day long weekend, this year’s Festival – to be held on 3 May – promises to be bigger and better with more delicious seafood, wine and a first-class line up of entertainment.

The event commences at 11.30 and features the finest Blues, Roots, Hip Hop Jazz and feature recording Artists across THREE stages By Day.

The first artist announcement included a compilation of acts who recently starred in this years triple j Hottest 100 music poll with the event headliners BLISS N ESO, grabbing 3 tracks in the countdown, followed by END_OF_DOCUMENT_TOKEN_TO_BE_REPLACED