The free shows see Charlie Mayfair take the role as main support as they join Sydney locals Phatchance and Coptic Soldier who will perform a joint set to celebrate their individual new releases.
END_OF_DOCUMENT_TOKEN_TO_BE_REPLACED Day two of Sunset Sounds 2011 arrives, bringing with it steady rain and a forecast of nothing but. Organisers have spread sand over some of the affected areas, but when I arrive on Thursday afternoon the damage that the combination of thousands of feet and a whole lot of rain did to the grounds yesterday is easily apparent. Areas that were grassy are now plains of squelchy mud ready to snatch unsuspecting thongs from feet and disappear them forever and the paths we traversed yesterday are now boasting small streams of rainwater.
END_OF_DOCUMENT_TOKEN_TO_BE_REPLACED

At the beginning of November Sunset Sounds came together with a bunch of Brisbane music’s most supportive media outlets, to shine the light on local artists through the Sunset Sounds Foster Band Initiative.
END_OF_DOCUMENT_TOKEN_TO_BE_REPLACED

This video was filmed by our good friend Patrick Self (www.patrickselfvisuals.com)

Life Music Media are fostering Charlie Mayfair in a competition to play at Sunset Sounds in 2011!
“To celebrate, we’ve decided to make some videos of acoustic covers of songs written by our favourite Sunset Sounds artists. THIS IS NUMBER TWO!

“Life Music Media are fostering us in a competition to play at Sunset Sounds in 2011! We’re so excited about the possibility of playing the festival that this month we’ve decided to release some videos of acoustic covers of songs written by our favourite Sunset Sounds artists. So here’s number one.

It’s Ladyhawke’s song ‘My Delirium’. Let us know what you think”… Charlie Mayfair

There are two spots up for grabs with 10 bands eagerly vying to be one of the chosen.

And so their three-part-harmonised hollering led them to play at many lovely venues like The Powerhouse, The Troubadour, The Zoo, The Sound Lounge, World Bar and The Old Museum sharing the stage with the talented likes of Old Man River, Dan Parsons, Skipping Girl Vinegar, The Bedroom Philosopher, The Boat People, Loren, TheCoronas (IRE) and Iceland’s Svavar Knutur, amongst others.

Wasting no time jumping into the studio, a short six months from inception, their debut release Watch My Hands “is a five-track harmony wonderland” (Scene Magazine) imbued with a bohemian flair while striding effortlessly between elements of folk and pop. Launched at The Zoo in Brisbane to an impressive capacity crowd, the release has since received enthusiastic nods from across the nation with a feature on triple j Unearthed, spot plays on the station, and a growing collection of glowing commentary on the bands’ live shows and debut recording.

Having made a quick trek to Sydney to launch the release to a welcoming reception at the Finders Keepers markets and MUM, the remaining months of 2010 will see the group once again hit the road for their first east coast tour which follows the release of their debut video clip for ‘If I Fell Down’. The shows will feature new songs and showcase the newly expanded bands’ impassioned live show.

Available in stores via Green Distribution and online via Waterfront Records 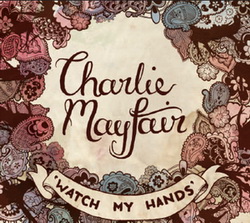 Ever craved some beautifully crafted music comprised of gently soaring harmonies and dainty whimsy, yet with a mature touch to the sound and lyrics? Well, Brisbane pop-folk band Charlie Mayfair, and its first offering, EP Watch My Hands, may just become your new addiction.

Forming only in January this year, Charlie Mayfair are set to make themselves heard around Australia after bursting out on the Brisbane scene over the past six months.
END_OF_DOCUMENT_TOKEN_TO_BE_REPLACED

END_OF_DOCUMENT_TOKEN_TO_BE_REPLACED