) explodes onto the ARIA Album Chart this week with “Reality Killed The Video Star”, claiming his fourth Australian No.1 album to give him an impressive total of twelve weeks at the top of the chart. The international superstar, who will perform at the ARIA Awards next week, scored a total of nine weeks at number one for his 2004/05 “Greatest Hits” release, along with one week at the top for both “Intensive Care” and “Rude Box” in 2005 and 2006 respectively. He also claims the first chart topper on the new ARIA Digital Album Chart with “Reality Killed The Video Star” and whilst Foo Fighters were number one on the Physical Album Chart, Robbie’s digital sales were extensive enough to ensure him number one overall, as reflected by the ARIA Album Chart. It’s only the second time since digital album sales were included in the album chart some two years ago, that the number one Physical Album and number one on the ARIA Album Chart have been different.
END_OF_DOCUMENT_TOKEN_TO_BE_REPLACED

Life Music Media (LMM): You’re fresh from a tour of New Zealand. How did it go?

Tim Harvey (TH): It was amazing. I wasn’t expecting to enjoy it so much. The countryside is mind blowing and the people are gorgeous and so friendly. We played about seven shows. We were kind of freaked out because the first night we got there we played a party and the band that went on before us, when they finished a song, nothing would happen, no one would clap. It was really weird! But when we got on the claps started filtering through.
END_OF_DOCUMENT_TOKEN_TO_BE_REPLACED

and is in Australia doing a Spoken Word Tour which is like stand up comedy based on his amazing life featuring interludes of astounding bass playing. Called the Breakfast of Idiots after Robert Palmer‘s famous breakfast of choice – a cappuccino and a martini.
END_OF_DOCUMENT_TOKEN_TO_BE_REPLACED

LifeMusicMedia Sunday Selection is your weekly view to Queensland Artists

END_OF_DOCUMENT_TOKEN_TO_BE_REPLACED 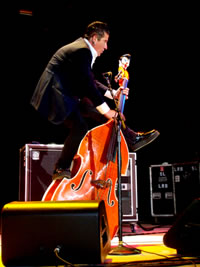