Beardyman comes to Australia for four special shows, including an appearance at the prestigious Just For Laughs Sydney Comedy Festival.
END_OF_DOCUMENT_TOKEN_TO_BE_REPLACED 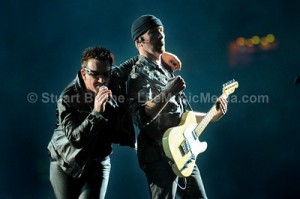 The crush down Caxton St at five pm begins the stadium size spectacle that will be U2 and Jay-Z tonight. By the time Jay-Z takes the stage at 6.30pm, the standing room ticket area is already mostly full. Jay-Z lives up to his hype, resplendent in Gangsta Garb, sunglasses welded to his face, rap antics peppered throughout his set, a ten piece accompaniment to his words provided by drumming, saxophone, trumpet and keyboard among others. He’s playing early, to an audience mostly waiting to see a main act distinctly different in style. He copes well with this, managing to get hands in the air and ladies spinning clothes above their heads during the one hour set. ‘On to the Next One’ and ’99 Problems’ get the crowd going, and ‘Forever Young’, covered in an ode to Notorious B.I.G, is also popular. Throughout the set the bass is massive, pummeling the throat, rattling hearts against rib cages. He exits the stadium in a stretch golf buggy.
END_OF_DOCUMENT_TOKEN_TO_BE_REPLACED

END_OF_DOCUMENT_TOKEN_TO_BE_REPLACED

*** LifeMusicMedia Photo Gallery: JEFF MARTIN & THE ARMADA @ The Hi-Fi, Brisbane 10 May 2009 ***
The Armada will celebrate the national release of their Eastern- fueled, Zeppelin-stained self-titled debut with a short run of launch shows around the country this May.

The Armada features “ferocious drumming demon” Wayne Sheehy (Robert Palmer, Ronnie Wood) Martin’s partner in crime, from Cork, Ireland whom he recorded the album with in 2008. The record was finished at “analogue wonderland” Poons Head studios in Perth, WA towards the end of 2008 and will be in Australian shops on Saturday May 2.

“The Armada is a very big, dark, Satanic, sexual rock show, and I love that, it’s a big part of my personality.” says Martin. “The feedback has been amazing, from Tea Party fans and new fans. The Armada did a trial run in Australia in November, and you’d think that the audience for my music would get older. But there was young people everywhere — 20-year-olds getting into it and digging it because it’s just great rock ‘n’ roll music.”
END_OF_DOCUMENT_TOKEN_TO_BE_REPLACED

The Frontier Touring Company and Roundhouse Entertainment are honoured to present the legendary Mr Leonard Cohen in his first Australian concert tour in almost a quarter of a century. The tour will include a series of indoor arena concerts plus a day on the green winery shows.
END_OF_DOCUMENT_TOKEN_TO_BE_REPLACED