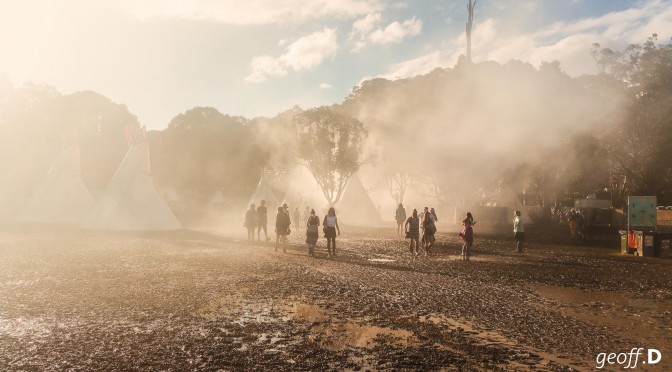 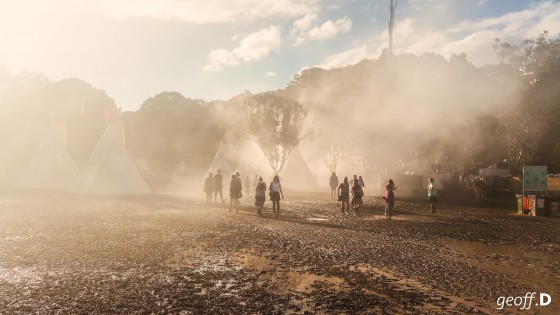 Our tents may have been wet, but our spirits were not dampened,

Day 1 – Who didn’t get up on stage with Mark Ronson should be the question? 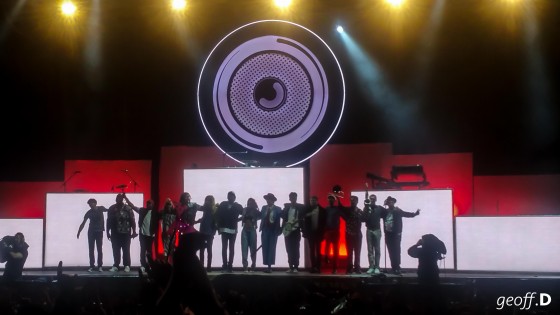 Splendour really was a year for seeing your next favourite band, playing at a particularly early slot in the Mix Up, local lads Mansionair laid down some blissful notes with vocalist Jack Froggart’s crooning bringing even the most vaguely uninterested punter to a stop as they passed the tent. By the time the group dropped single Hold Me Down, the mix up tent was so full it put some later international acts to shame.

The dash to the Amphitheatre was up next to see total badass Ecca Vandel, with a costume straight out of a 90s Salt-N-Pepa clip the only thing more silver than Eccas tongue were her pants. This lady oozed swagger on stage and her “no fucks given” attitude quickly worked up the early birds who’d made the trek up that infamous hill.

Back down the hill to the GW McLennan tent to see London act Gengahr (I’m still trying to work out if their named after a Pokemon). These guys were one of the most hyped bands on the festival bill and it was quite quickly clear why, their set was tight and faultless, but I spent to much of the set trying to figure out the bands I thought they sounded exactly like (cough Tame Impala and MGMT).

My interest in psych pop had waned and I headed towards the Forum to catch the premier of film Better Take Cover a documentary about the law suit between Men at Work and the company that owns the rights to Kookaburra sits in the old gumtree, this was a great interlude into the next panel on Artist copyright which I was really excited for, until about 20 mins in Paul Mac and a copyright lawyer started arguing over what was acceptable and what wasn’t. At this time I turned to my mate said DZ and we both nodded in agreement.

DZ Deathrays, what can I say, with Catfish cancelling on the Wednesday morning DZ took the call to arms and played a set so bone-crushing that you wouldn’t be a fool for thinking they were always on the lineup playing the main stage, These guys know how to get a crowd amped and the first Circle pits of splendour were born, After a electro rock cover of Daft Punk and crowd favourite Gina Works At Hearts a much needed rest was taken.

As the sun started to fall, I made my way back to the Amphitheatre so excited to see my favourite band Death Cab for Cutie. I’d like to be able to write a detailed review of this set, but in all honesty I pretty much stood there in awe for an hour as the rain started to come down. Set closer Transatlanticism was just spectacular and there was so much love in the air, suddenly I found my arms lifted over the people around me and before I knew it I was in a circle of 20-30 people singing those infamous lines along with Ben “ I need you so much closer…” It was magical.

By the time Death Cab was done, the rain was pelting down and it was only fitting to stick around for Of Monsters and Men, who played a melodic set that was only unhinged by the fact so many people were clearly just hanging around for some Ronson love.

As the night was truly upon us Mark Ronson hit the stage, and when I say he hit the stage, he hit it hard, many punters had been scared away by the rain and those poor souls don’t know what they missed, with a set packed of cameos (Illa Thompson, Keyone Starr, Miike Snows – Andrew Wyatt and even local Tame Impala front man Kevin Parker), there were so many in fact that it was at times hard to keep up with who was who. Lets just say Ronson likes to Party and he likes to make sure everyone else is having a good time as well. Set highlights were Business International favourite “Bang Bang” and of course the set closer, “Uptown Funk” with every single punter on the hill getting down and funky. 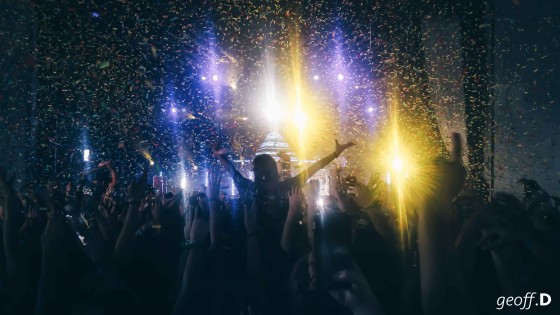 Waking up and walking out into the campsite it was a case of Mud to the left of me, mud to the right of me, oh wait… mud flicking up in front of me… and man was it great.

Day 2 started with what was my biggest surprise of the festival, a 12:50pm set from the legends Circa Waves that saw so many people at the amphitheatre I couldn’t help but rub my eyes in disbelief (ok ok that may have just been my lack of sleep). These brits were the perfect cure for those Day 1 hangovers and before I knew it I was bobbing along. As I turned from left to right it was no accident so many people were here. Punters were singing along to every line and as the sun finally stated to shine through, track T-shirt weather seemed oh so perfectly fitting. From there it was off to see Art of Sleeping who never disappoint, with track Above the Water being one f my favourite sing along moments of the day.

As I weaved through the crowd to get a “primo” spot for up and comers SAFIA it hit me that these guys were playing a late afternoon slot without even having a debut album out, as the crowd filled anticipation levels rose, and as the clock ticking sound overcame the stage, it was on. The boys came out an uproar during opener Counting Sheep and after the first song, I’d called it… THIS was the must see show of Splendour 2015. The boys smashed through a collection of recent hits and their own version of Peking Ducks – Take me over (which they feature on) which even included a cameo from Tkay Maidza who proudly stomped her feet as she sang along the chorus. In primo festival closure the confetti came down and a crowd was left absolutely stunned and hanging for the release of the boys new album.

It was off to amphitheatre to see The Grates play a sunset show of festival classics. I wasn’t sure what to expect as, lets be honest, 19 year old Geoff was in love with Patience and the Grates, and you know what 26 year old Geoff completely understood why again. Their set was full of classics like 19 20 20 and Burn Bridges which still sound amazing. It’s solid acts like the Grates who time after time draw crowds together for great sing-along moments.

I spent abit of time after this floating from stage to stage seeing snippets of acts such as the oddly interesting King Khann and Australian icons The Church, who drew a small but energetic crowd, it truly was magical seeing them play Under the Milky Way live.

After a quick stop (festival food is never quick lets be honest) for a rad Mushroom burger, I planted my feet on the hill to witness the pure explosion of pop that was The Wombats. Ever find yourself at a show where you realise you know the words every line of every song, well welcome to a Wombats show. As you looked around the amphitheatre is was clear that this was the biggest crowd of the festival as the crowd sang, swayed, bopped to every beat (really you couldn’t do much more in the thick sea of quicksand… I mean mud). It was such an energetic crowd that frontman Matthew Murphy even proclaimed it as one of the shows he’d like to remember on his deathbed. And lets be honest seeing that packed amphitheatre singing and dancing along to “Lets Dance to Joy Division” I couldn’t have agreed more.

Topping the night off was Florence + the Machine, If you’ve never seen a Florence show before, you’ve never seen beauty. There was so much love on both the stage and in the crowd that when lead singer Florence Welch stripped her top off and told the crowd to take layers off and embrace each other, we all did. Dressed in a pure white, Florence helped us all forget about how sore and tired we really were, Day 2 had really taken its toll. 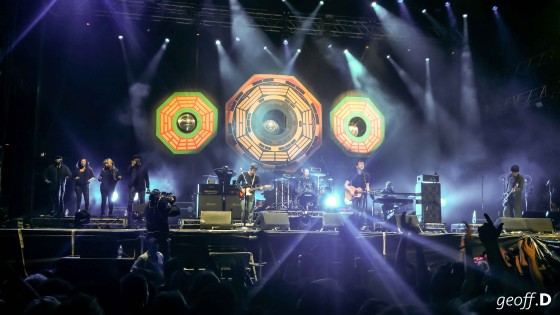 Yep we’ve made it this far. By day 3 of the marathon that is Splendour, feet are aching, ears are ringing, and people are beginning to just embrace the mud. You’d like to think that Day 3 would bring along some well-needed rest but no its time to rock on, and that we did.

After floating around for most of the morning checking out the shops and crafts side of Splendour my first real trek was to the Amphitheatre to catch the Vaccines lay down some raw rock’n’roll, strumming around like they owned the stage, its great to see these guys who were last at Splendour in 2011 really own the stage and during hit “If you Wanna” it was clear the crowd agreed.

Quick stops at indie darlings Alpine and MS MR were needed to break up my day before I headed back to the Amphitheatre for a night of yup, more rock’n’roll.

What can I say about Royal Blood that hasn’t been said before, but here goes. How the hell does all that sound come from only two guys? That seemed to be the consensus, as the two gents strutted out song after song of pure no frills rock with the crowd eating up tracks like Little Monster and Figure it Out. They definitely proved their worth of the main stage even thought they spent most of the show so close together that you were wondering about all the empty space on stage.

I turned around to then see how big the crowd had gotten and yup, it must have been time for Tame Impala as I was suddenly starting the feel the sweat of the people surrounding me. I have to be honest and say I haven’t always been the biggest Tame fan, but I can’t disagree with the fact that their live show is nothing but a solid psychedelic immersion. As the bands lighting backdrop became a swirl of colour and psychedelic projections the crowd enthusiastically whipped out their “supplements” for the night,

(Did I mention their were only 92 drug arrests this year, which is pretty impressive compared to previous years, good job Splendour).

After quite a bit of dispersion after Tame, the iconic BLUR hit the stage. Any talk of whether these guys were relevant enough to close out the final night of Splendour was quickly squashed with a set of classics that you couldn’t help but jump and sing along to. Things really flared up during “Song 2” (and I mean that literally, some dumbass lit a flare 1 metre away from me in the middle of the mosh) and for the next hour I jumped and screamed along to what could only be described as a perfect end to festival. Damon Albarn is one hell of a front man and had the crowd eating out of his hands during “Parklife” and what was definitely a highlight for me “Girls and Boys”

It couldn’t end there though, in true Splendour style it was only fitting to go dance one last time to some funk within the Global Village and say goodbye to both old and new friends.

See you next year Splendour!