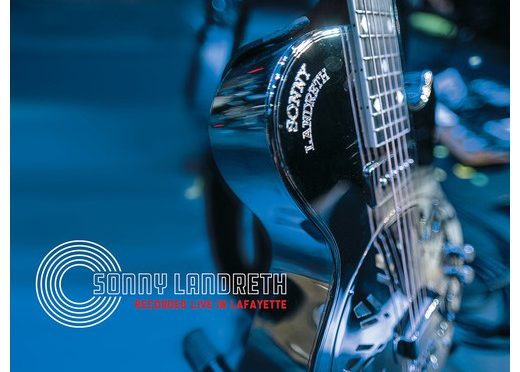 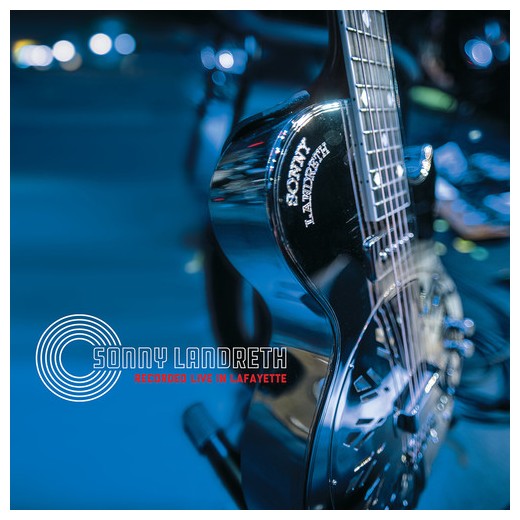 Another high quality and interesting release from Provogue / Mascot Label Group which is becoming something of a powerhouse for both established and up and coming blues artists of all persuasions. Clyde Vernon “Sonny” Landreth is a renowned slide guitarist, and “the King of Slydeco”, hailing from the deep south of the USA in Mississippi who has been based in Lafayette for many years . His background includes being part of both John Hiatt’s band and John Mayall’s Bluesbreakers, as well as featuring on both live and studio recordings with the likes of Marshall Crenshaw, Eric Clapton, Jimmy Buffett, Little Feat and Mark Knopfler.

Landreth has a unique playing style, where he frets notes and plays chords and fragments behind the slide, tapping, slapping and picking strings assisted by a special hybrid flat/thumb pick – which may be why his playing sounds a little different to many other blues guitarists, even to the untrained non-playing listener (me!).

After a dozen album releases of his own, including the Blues Music Awards Best Album for the latest release Bound By The Blues, Landreth decided to try and capture an acoustic collection based on demand from many of his fans, and pulled his electric trio (Brian Brignac on Drums & Percussion, Dave Ranson on Bass) together with a few friends (Sam Broussard on Guitar and Steve Conn on Accordion) at the same time, to cover both angles in one career-spanning performance on his home patch in Lafayette. There are two ways of listening to the double album – in the recorded order, with the Acoustic set first, or at random – and I have been doing both without arriving at a recommended option, partly because sometimes it is hard to tell the difference between the two sets.

The acoustic arrangements are all new, covering all 35 or more years of Landreth’s catalogue, opening up with the title track of his 1981 debut album Blues Attack which is a bustling slide-guitar shuffle that features the first of a few accordion solos, and is followed by live favourite Hell At Home, which sees the two guitars of Landreth and Broussard playing off against each other at every opportunity, and reveals the great acoustic playing of the guest. We are then treated to an extended run through Key To The Highway, which harks right back to the earliest days of the Delta Blues era, such as Robert Johnson might sound in the modern era, with the main solo from Landreth appearing effortless as he demonstrates all of his technical skills. The acoustic arrangements allow all of the players to excel, but leaves plenty of space between them which serves to accentuate their abilities.

Creole Angel is something of a rarity live, and highlights the Zydeco roots of the artist, with a hint of Clapton in the vocals, and some mean accordion playing over the shuffle of bass and drums before some intricate guitar picking and tapping comes to the fore.

A World Away starts off in a standard slow blues fashion, and builds up to an epic that features the two key collaborators, with an amazing accordion blues solo, followed by a wonderful acoustic guitar solo featuring both Landreth and Broussard – with neither man plotting what parts they were going to play in the solo.

The High Side and Bound By the Blues close the acoustic set, with Landreth showcasing his playing styles on two different resonator guitars, before the encore version of The USS Zydecoldsmobile which quickly develops into a joyous melange of styles, with some clean harmony vocals, and the drive of a rolling bass line alongside the rimshots and pitter-patter of the drums.

The electric set kicks off with Back to Bayou Teche which brings the accordion into the electric band, and replaces the sparseness of the acoustic set with depth and warmth from a full-blown rhythm section, with an extended slide / picking masterclass through the middle of the song, morphing back into the riff, reminiscent of The Georgia Satellites own Battleship Chains.

There is a tempo change into the delicate opening of True Blue with the ethereal slide-guitar break opening, before the band kicks in with a sensuous beat, and what would be a standard blues ballad, is transformed by the stunning guitar work of both, and the clarity of Landreth’s soloing.

The band then runs through the instrumental trilogy of The Milky Way Home, Brave New Girl, and Ümbresso. The first is less blues and more progressive jazz-rock boogie with a free-form riff that allows Landreth full rein; the second is a more complex piece, full of harmonics, and some complementary melodies from the piano which really adds to the guitar lines; and this segues into the final track which has a frenetic opening riff – giving no rest to Landreth as these are the two most difficult songs in the repertoire.

There is no doubt that these three tracks live together in their sound and style, with some riffs and chords out of the Max Webster and Rush back-catalogues, and some virtuoso playing that would stand alongside both Steve Vai and Joe Bonamassa, but never completely departing from the slide-guitar feel.

He takes a bit of a rest in Soul Salvation, a swaying slow-dance with a traditional chorus and backing vocals, and accordion and guitar solos, before cranking the tempo and volume back up for the Delta Blues stomp of Walking Blues which was the set-closer of the show.

The band then indulges an in-joke with a rendition of The One and Only Truth led by Steve Conn on accordion – words of advice from Landreth’s recently passed mother to whom the album is dedicated.

Disc 1: Acoustic
1 Blues Attack
2 Hell At Home
3 Key To The Highway
4 Creole Angel
5 A World Away
6 The High Side
7 Bound By The Blues
8 The U.S.S. Zydecoldsmobile
Disc 2: Electric
1 Back To Bayou Teche
2 True Blue
3 The Milky Way Home
4 Brave New Girl
5 Überesso
6 Soul Salvation
7 Walkin' Blues
8 The One And Only Truth