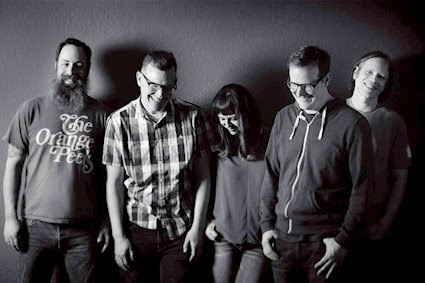 Dream-gaze syndicate Soft Science preview their new double A-side single ‘Sooner/ Paris’, via Test Pattern Records. ‘Sooner’ is the second single from the band’s forthcoming ‘Maps’ album, to be released in early June. ‘Paris’ is a wistful-blue cover of Northern Picture Library’s (NPL) 1994 track ‘Paris’. These new tracks follow the album’s first single ‘Undone / I Don’t Know Why I Love You’, which saw the band flirt with sounds closer to My Bloody Valentine and The Primitives.

“Sometimes lyrics are like therapy – Sooner is one of those songs”, explains Soft Science vocalist Katie Haley. “The lyrics for Sooner are an expression of how difficult it is to continue to push yourself in this crazy hectic world we live in. Sometimes, I feel like I lose myself in the barrage of daily news, the push and pull of work, and family obligations – it can all feel overwhelming to the point where I feel lost. Dealing with those feelings was the inspiration for this song.”

‘Sooner’ evokes emotion as the band pulls from influences like Pale Saints and The Mighty Lemon Drops. The B-side ‘Paris’ is a thoughtful, heart-wrenching tribute to NPL, originally recorded for the Sarah Records tribute compilation ‘Popkiss, TBTCI meets Sarah Records’, a limited release via The Blog Celebrates Itself Records. This track has since been remastered and, for the first time, is available for wider digital distribution.

Hailing from Northern California’s Sacramento Valley, Soft Science fuse melody, sound and texture of 60s pop and 90s shoegaze like molecular gastronomists blend physics and chemistry to transform food. Together this 5-piece band have managed to create their own sweet blend of modern pop music with a sonic edge.

The band’s members are influenced by such bands ranging from the Zombies and Beach Boys to Lush, Teenage Fanclub, Ride, Pale Saints, New Order, and Jesus and Mary Chain, along with newer artists such as Beach House and Frankie Rose.

Soft Science rose from the ashes of indie pop band California Oranges prior to releasing their last album in 2008. Soft Science was a natural transition for Katie Haley (Holiday Flyer) and twin brothers Ross and Matt Levine, who had essentially contributed to each other’s music projects on an off for over a decade. With Katie Haley on vocals, Matt Levine on guitar, and Ross Levine on drums and back vocals, Soft Science were soon joined by bass player Mason DeMusey to create unique dream pop music, inspired by 90s shoegaze and 60s brit pop. The band then solidified their sound with the addition of Tony Cale (English Singles) on drums and Ross moving to keyboards.