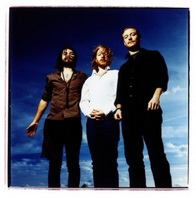 Stuart: Hey guys, great to see you back touring Australia. This is your second visit here, do you have any “stand out” memories from last years Australian tour?

Simon: All the shows last time were a ton of fun. we couldn’t believe how much people knew our records and everyone knows how to have a killer evening. one of the venues flooded on the day of the gig which was bizarre but apart from soggy, crinkled feet it all ran pretty smoothly.


Stuart: The last couple of years have seen you touring and playing with some equally impressive bands ( Muse, QOTSA, The Who, The Rolling Stones…). Have you had a chance to reflect on your success’s?

Simon: fortunately there’s not been much time to reflect. we’re always looking forward to the next challenge and making every show better than the last and evolving from record to record. (it was pretty fucking sweet though)

Stuart: Are there any artists you’d like to play or collaborate with in the future?

Simon: We’d love to have Joshua Homme on our next record shredding the shit out of his guitar and Fiona Apple weaving some beautiful melodies. I’d also love to write a song with Daniel Johns.


Stuart: Name the three best and worst things about touring?

Simon: BEST; the music, the people and the places
WORST; time spent travelling, missing your family and not feeling creative on the road


Stuart: How would you describe your live concerts to the average punter?

Simon: We are a loud rock band. we love when the crowd starts singing louder than us. there’s a real community vibe.

Stuart: You’re currently working on a new album, do songs come easily to you?

Simon: I’m fortunate that they come fairly easily to me but that doesn’t mean that they’re any good. shit songs come just as easy. some songs come more fully realised than others but i only ever write songs at home so when i’m on tour it doesn’t happen.


Stuart: Have you selected or shortlisted/wish listed producers for the next album?

Simon: We’re probably gonna go with our dream team of GGGarth and Andy Wallace again. they did a great job on puzzle and we feel they can sprinkle their magic dust over our new record too.


Stuart: Do you have a name for the new album?

Simon: boooooom, blast and ruin is the current fave.


Stuart: Can the Australian audience expect to hear new material at your upcoming shows?

Simon: We’ll maybe play one or two new songs, but because we’ve only toured australia once before we think there’s a lot of songs from our records that we didn’t get a chance to play last time, so we’ll see.


Stuart: When you’re on break from touring and not recording, what’s a typical day in the life of “Biffy Clyro“?

Simon: Trying to sort our lives out.


Stuart: What bands are you currently listening to?


Stuart: If you hadn’t become musicians, what would you be doing?

Simon: We never really considered anything else. there was no plan b. all or nothing.


Stuart: Thanks Simon, can’t wait to see you rocking live and loud in Aus!