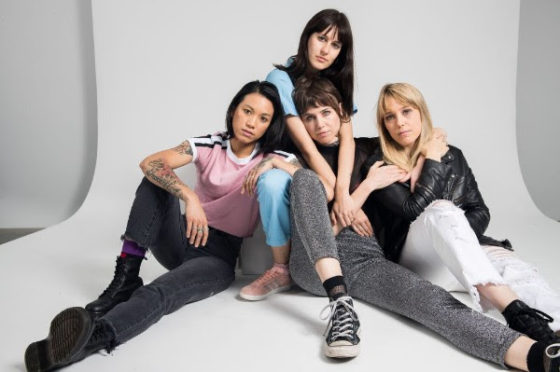 After having a huge year out on the road through 2017 and 2018 playing over 150 shows and releasing critically acclaimed EP ‘Ready Or Not’ Rackett have returned triumphant as ever with their new single, ‘Tried To Quit’. With snappy production and an attitude-laden delivery of lead vocals and punk harmonies, ‘Tried To Quit’ deals with all the vices and habits we can’t quite kick. As ever with this one, Rackett have brought us a relatable tale that is primed for a sweaty rock and roll environment.

Opening with a fantastic distorted bass line which leads into a chugging guitar line that brings extra heaviness to the track, the instrumentation driving ‘Tried To Quit’ is full of chaos itself; a fitting representation of the back and forth of the song’s narrative.

The origins of ‘Tried To Quit’ have been with Rackett’s lead singer for some time, but became fully fleshed out and developed as she herself emerged from a period of, what she describes as destruction. As you can hear in the tight pulls and pacing of the single, ‘Tried To Quit’ is built on tension and delivered with finesse and sophistication. “I was immersed in the punk scene there [Melbourne] and all its debaucherous indulgences: drinking, smoking, generally not giving a fuck. I was a rebel without a cause, except that of my own destruction. I guess in a way, I tried to quit on myself and I just couldn’t do it.” Bec Callander

Working with Dave Hammer (JEFFE, Thundamentals, Megan Washington, Lime Cordiale) on production and recorded out of Def Wolf Studios in Sydney, ‘Tried To Quit’ has a celebratory energy behind it that is undeniable when listening to the track for the first time. It is incensing and addictive, directly in contrast to the song’s message of trying to kick bad habits to the curb.

It’s been a wild ride for Rackett since they released their bombastic debut EP ‘Ready Or Not’ in 2017. Having already shared the stages with the likes of The Darkness and Killing Heidi, along with lucrative festival spots at some of Australia’s best events including Jack River’s Electric Lady Festival, Lost Paradise, Mountain Sounds Festival, Groovin The Moo, Big Pineapple Festival, Festival Of Doom and Secret Garden Festival, Rackett have risen through the ranks to dominate in their field. Named winners of the ‘Rockin The Puburbs’ competition run by the Australian Hotels Association, Rackett have also enjoyed national exposure as the featured talent in an Australia-wide rollout for General Pants.

Ever adventurous, the charm of ‘Ready Or Not’ was quick to reach international audiences, earning Rackett impressive charting positioning on the iTunes Canadian Rock Chart (#10) and garnering spins with premier Australian radio stations Triple J, Triple J Unearthed, FBi, 4ZZZ and more. Being selected as participants in the ‘Extra Support Acts’ competition (run by YouTube, The Rubens, Universal Music and Extra Gum), Rackett laid down the unofficial music video for ‘Tried To Quit’, which has now earned over 300,000 views.

Having successfully sold out venues throughout Sydney and Melbourne this year in the wake of their 2018 single releases ‘Alive’ and ‘Space Cadet’, Rackett demonstrated their ability to consistently level up and kill it in front of longtime fans and newcomers alike.

“RACKETT are an awesome band. We saw them play recently and we were blown away. As soon as we met them, we thought, ‘Man these girls look like stars already; how long have they been doing this? They seem like absolute naturals’.” The Rubens

Rackett will be bringing their ferocious sounds to crowds along the east coast and down south through October and November; have you not had the chance to properly become immersed in some fire and brimstone-level punk fun from one of Sydney’s best, now’s your time.