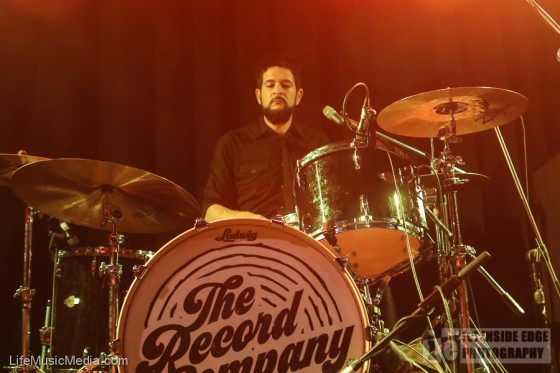 Making the dash across town from the early and packed-out Bluesfest sideshow of St Paul & The Broken Bones, I made it into a sparsely populated Northcote Social Club bandroom just in time for the grunge-folk duo that is Little Georgia – Justin Carter and Ashleigh Mannix have been involved in a few musical projects over the years, and got together in 2015 to explore their mutual attraction for alternative country songs.

They recorded their album live in the studio, and released Bootleg in January 2016, and performed most of the tracks of the record, including Gabrielle, Emily, and their single Forget Me. Favourites for me were Ticket to the Country and California, with the two sharing vocal duties, both playing guitars, and Ashleigh in particular demonstrating both warmth and grittiness in her singing. The growing crowd got behind these two and gave them a warm round of applause at the end of the set.

The whispers coming out of the Bluesfest weekend were that one of the hottest acts on show, playing three sets up at the festival, were Wisconsin / LA band, The Record Company – featuring Chris Vos (guitar, lead vocals), Alex Stiff (bass, backing vocals), and Mark Cazorla (drums, backing vocals). Together for 6 years, but with just the one album, Give It Back To You, on release, the band proved to be much more dynamic and exciting live than on the record.

Coming across like a cross between Royal Blood and The Cadillac Three on steroids, and despite Alex Stiff suffering from a dose of the flu, the band delivered a high-energy set featuring pretty much all of the record, with some distorted vocals in the opening On The Move, a stripped-back tale of how Chris Vos found himself in Los Angeles having left the farm in Wisconsin, and how he met the other two in This Crooked City.

Vos plays acoustic and electric guitars, and a mean lap steel guitar with the occasional harmonica, and the songs range from the seedy dive-bar blues of Turn Me Loose to the upbeat Feels So Good with the mob-style backing vocals proving catchy for the by-now large and noisy crowd. Off The Ground is a definite winner with the insistent bass and rhythm guitar through the verse, and the lap steel guitar providing the contrast through the catchy chorus. The intro riff to In The Mood For You brings Parklife from Blur to mind, but takes on a life of its own in the “Yeah Yeah Yeah” chorus.

The off-tempo beats and country-fuzz of Hard Day Coming Down saw the band really let loose, with some crashing chords and accents, and Vos demonstrated his powerful voice on this, and the equally frenetic Rita Mae Young.

The band delivered a really tight and energetic set, including doing part of a song on the floor among the audience, and returned for an encore, leaving the lucky 150 or so pretty much stunned at what we had just seen. This was one of those gigs we’ll all be bragging about attending in the future!