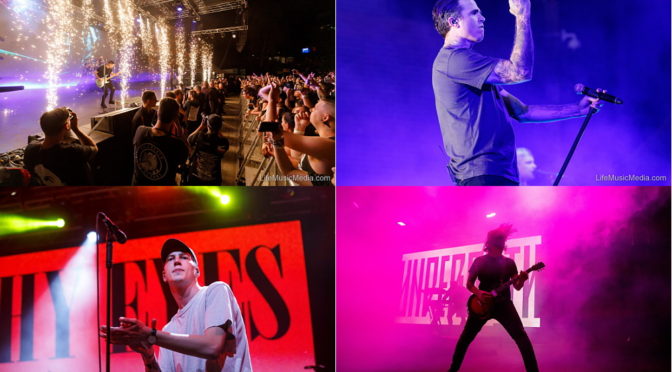 Judging by the ratio of sitting real estate  v.s. standing, at The Amity Affliction’s Heaven and Hell festival, I’d say there’s a good chance we’ll see it back again next year, because like Frenzal said, ‘all we need is a punch in the face’, sonically that is.

As the ‘new festival kid on the block’, Heaven and Hell needed to deliver, and deliver it did, like an Uber Eats scooter on nitrous with bells on.

Early on, each act proves a worthwhile selection as they progressively raise the bar for the next band.

By sundown, Crossfaith have grown the steady stream of black t-shirts into a lake, and as energetic as they are, you can’t help but feel that this is merely a hint of what’s to come.

Having a dual setup on-stage is paying off as Trophy Eyes get right to it, with no setup downtime to bugger up the momentum of things. Their sound has something for everyone as they wind their way through rock, pop and post-hardcore styles to name a few. Some quieter moments see John Floreani’s vocals reminisce of that low and deep, yet emotive style that Matt Beninger from The National does so well.

‘Friday forever’ is popular as ever, though closing their set with ‘You can count on me’ was a wise choice, as you can now hear the crowd singing above the P.A.

At this point I’d like to give a shout-out to the sound guy who figured 13 years was a long enough wait and played a few of songs off the new Tool album: Fear Inoculum in the downtime between sets.

By now, the punters are chomping at the bit during what seems like a long wait, as applause ripples around the hill intermittently every time a roadie walks on-stage or the music is faded down. All this adds to the building tension and anticipation, until finally the music fades out for good and the crowd loose their minds, as Underoath take the stage for ‘On my teeth’ with a solid drum intro from Aaron Gillespie and the quitarist, who is bashing hell out of  2 floor toms like a blacksmith.

Now the crowd are going for the audience participation trophy, as their lungs lend support to the classic, ‘It’s dangerous business walking out your front door’, followed by the melodical and stirring: ‘I hate it’. Moving down the hill closer to the front improves the listening experience greatly and the quality of the mix at this point is bang on for clarity and definition, you can hear all the parts that make the whole.

After 2 seconds of the film projector sample for the intro to ‘In regards to myself’ the fans roar their appreciation for its inclusion in the set list.

Spencer grabbing a guitar for the end section of a track from ‘Erase me’, really adds something to the experience.

As we’re given the ol’ 2 song wind-up, Spencer corrects it to ‘sorry, we’ve got 3 songs left’ and the festival goers love it.

Next they hit us with ‘A boy brushed red living in black and white’ and Underoath do what they do best, absolutely nailed it, and great power for the ending.

Another crowd favourite ‘Writing on the walls’ is given a similar treatment and we can all die happy.

Then before you realise, the last song is finished, the band is saying thanks and good night and it’s all over way too soon. Kind of like a good meal, you leave satisfied, though still not wanting it to end.

The Amity Affliction take to the stage with an atmospheric instrumental intro, a big snare sound and fountains of fireworks shooting out of the floor and ceiling. After the opening song, it’s straight into ‘Doomsday’, which draws a deafening roar and everyone singing loud to the quiet piano bit.

‘I bring the weather with me’ proves even more popular, which sees the circle pit cranking flat out, then we’re hit with an awesome punch in the face for the intro to ‘All my friends are dead’ So heavy and fast, then quiet and slow with the nicely sung ‘oooh oooh’s, and now the massive heavy bridge and the finish. I don’t think it get’s the biggest cheer because we’re all a bit stunned after and still trying to absorb what just happened, and that’s what I like about The Amity Affliction’s music and professionalism, they can move you when you don’t expect it, they encourage thinking and they don’t fit the usual mold of ‘scream in the mike, look angry, bye’.

‘This could be heartbreak’ is a little quieter, but still gets the whole place singing at the top of their lungs as fireworks farewell the end of the song.

Overall, Heaven and Hell worked really well, everyone behaved themselves and the general vibe all day was great. Good choice of bands and set times. Given the chance I’ll be back next year to see new stuff and enjoy a bunch of heavy bands, 2 things I don’t get to do often enough, so thanks guys, bloody good idea, done well. Hope to see this festival again.