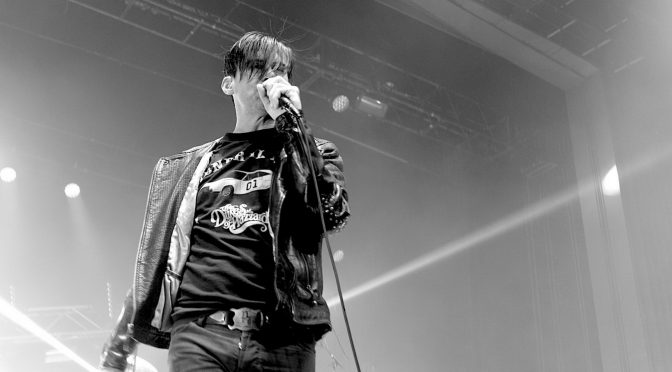 There’s little doubt that Grinspoon’s return to touring wouldn’t have received the response they have thus far.

This band has played an important part in the Australian music scene since they first appeared in the 90s; having remained energetic, consistent and dangerous over their 20 year career – putting in the hard yards to ensure live gigs are accessible to everyone, even in the regional towns of Australia.

These shows have been bittersweet; celebrating a milestone for monumental album, ‘Guide to Better Living’, whilst giving fans a proper chance to say goodbye, after the band called a sudden, “indefinite” hiatus in 2013.

Over the next two nights, it’s Sydney’s chance to let the band go out with a bang – and the crowd certainly turns it up.

I’ve been at sold out gigs before, but the Enmore is nuts. There are people jammed into every possible corner of the theatre; and once Grinspoon hit the stage, the floor literally shakes.

When you’re running through an album from start to finish, the core of your setlist is set in stone from the get-go. However, that doesn’t seem to sway Grinspoon’s performance; each song keeping the crowd on their toes, guessing at what will unfold next.

The noise and thrashing of the crowd is intense – throwing it back to those regional gigs (cough, Bathurst) that always seemed to result in the police being called.

The haunting ‘Scalped’ has fast become a highlight of the set – the strange blend of melodies, resulting in a cinematic, wharbling bridge that sounds unbelievably epic live.

‘Pedestrian’ sounds as playful as grunge gets, the crowd screaming “Happy Birthday” in perfect unison; ‘NBT’ a ridiculous assault of heavy noise, only outdone by the bass-heavy ‘Champion’.

The second set of “classics” remains the same across both nights – but doesn’t sound rehearsed or unexciting; each night the crowd connecting to a different song.

I witness one fan enthusiastically grab his mate around the shoulders, before screaming every word of ‘More Than You Are’ into his face.
This is why Grinspoon gigs are amongst the best.

Certainly, if these gigs really are the last of Grinspoon’s career, they are among the best the band have ever played, and a perfect reminder of why we all loved going to see them in the first place.