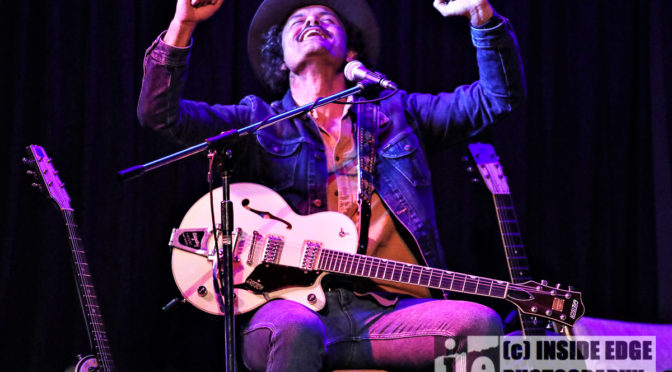 The opening act for the early show is local guitar prodigy, Taj Farrant, who at 11 years old, rips into a number of very grown-up rock songs on backing tapes, and delivers an impressive lead guitar line over the top – showcasing instrumental versions of tracks from Gary Moore, Eric Johnson and Journey, he also produced a fiery rendition of Steve Vai’s For The Love Of God, and then a solid vocal on Gary Moore’s Moving On.

The late show saw Brandon Dodd open the set, also a member of local Blues band Grizzlee Train, and best known for being part of Kasey Chamber’s band, deliver an emotive solo set, which included a couple of rip-snorting blues stompers, and some haunting ballads.  Brandon was at his best when letting fly on the guitar, but also has a real feel for honest bluesy songwriting and atmospheric performance at times.

Ash Grunwald has been around for much longer than he looks, over 20 years now, and has just released a new album in partnership with Josh Teskey that was due to be launched at Bluesfest.  Not to be dismayed by the cancellation, Ash has loaded up the van with surfboards and guitars, and has started an extensive regional tour taking in all parts of the country.  He is such an engaging personality, full of stories and banter while perched on the Stomp Box, and alternating from deep Delta Blues, from Howlin’ Wolf, and a slow version of Crossroads, to his own tracks from the Mojo and Hot Mama Vibes albums, and the new collaboration with Josh Teskey, Push The Blues Away.

Tracks that went OK in the early set appeared to get more life and soul in the late show, and while there were a couple of technical glitches, the party never stopped for long.

Whether on the steel guitar, or one of the Gretsch beauties on show, or on the more eclectic guitars used to deliver a range of tones – the overall sense of joy in the delivery of a rootsy blues stomp was palpable.  As we approached the official close of 11.30, Ash asked if he could do one more – and we got the cracking Walking followed by an energetic Shake That Thing, and then an encore of Crazy and a blistering Thinking ‘Bout Myself from the recent Teskey collaboration to end the night.  The next NSW show is in Sydney on June 5th, with 1000’s of km in between driving up to far North QLD, then over to WA, back to Brisbane and the Gold Coast doing all the small venues, before all the Capital City shows in early June.  Don’t miss him!

This is the sort of show that relies on the unwavering commitment of a small number of dedicated volunteers, and the willingness of artists like Ash Grunwald to venture out to off-the-grid venues to play for a hungry music-loving audience – and judging by the activity at the merch desk from start to finish, hopefully there is enough in the kitty to replace the radio-jack that got trashed when twirling the steel guitar mid-song!

Blues on the Mountain – https://www.facebook.com/BluesontheMountain