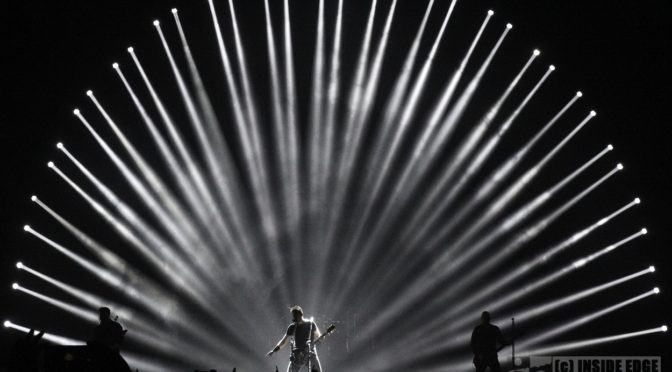 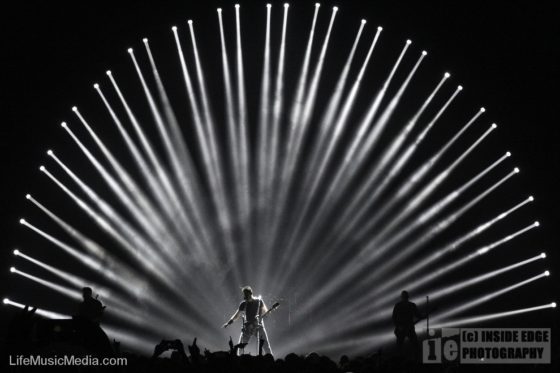 Nickelback have the big stage set and great lights of the stadium rock band they now are, and open up with Feed The Machine, followed by Woke Up this Morning and while we are packing up the cameras, the more laid back hit of Photograph. An extra guitarist appears for the huge crowd singalong of Far Away to fill out the acoustic depth, and keeps popping up on guitar and keys through the set. And the light show continues to impress.

Love them or despise them (and I admit to having always liked them), the band put on an epic feelgood show. Chad is quite the amenable host, telling some stories sending himself up, one of which he manages to fulfil later on, before piling into What Are You Waiting For with Hysteria-like backing vocals which may include some taped backing, but the sound is punchy and lush with harmonies and the back and forth vocals between Chad and Ryan work well.

Something in your Mouth is a cracking rocker with tongue in cheek lyrics and Brisbane laps it up and gives it back with interest. Bass and drums really drive this one under the riffs, and they are tight. A step back in time to Silver Side Up and the grungy riff of Where Do I Hide with the pounding drum beat slamming across the arena. There is some guitar interplay before Chad delivers the solo.

The Spiderman song Hero is now one of those all-time rock ballads, and Ryan Peake sings the second verse, while the light show cranks up another notch. Back to the archives for something off The Long Road, which had to be re-learned in Japan especially for Australia, See You At The Show which was a big hit Down Under, and features that monster riff which sounds immense.

Drummer Dan Adair gives us the opening to Figured You Out with the offbeat riff really cutting through the PA and both guitarists letting rip before they break it down to bass and drums and Ryan takes a verse himself before the crushing climax. A drum and bass intro prefaces Someday, with the phantom acoustic player reappearing to add more warmth to the global hit ballad, which meanders out through a free form outro. A bit of set changing in the dark, and some more story-telling and Ryan gives us the piano intro to Lullaby which Chad sings without guitar or mike stands to hide behind, and conducts the crowd on arm-waving.

The riffs return with that driving anthem Animals which tears the roof off the arena. Chad and Ryan do an acoustic guitar duet for We All Stand Together which retains its slightly celtic lilting feel, before Bradley (the drinks roadie) is summoned for more liquid supplies – a running gag through the set!

A couple of punters are hauled up to join the band for Rockstar, the blonde Felicity and the truly weird “shredder” who appears bizarre in Hawaiian shirt and headphones…..but they both play the game albeit with very few rock star moves. Cheesy to the max…..but you can’t help but smile.

The cheese continues with a Jager Red Bull shoey from a smart white trainer from the crowd……and then the riff returns with Gotta Be Somebody from Dark Horse which is not really one for the back end of the set, but feels good nonetheless. Another interlude for a return shoey for the shoe donor using Chads boot, the victim christened the King of the Bogans by Chad, through the hole in the boot. He gets an invite to the afterparty!

An impromptu version of Saving Me is proposed, but needs some retuning of guitars, as an extra song for the night. This actually works if a little rusty, and the chorus sounds enormous. How You Remind Me closes the set proper with a big singalong to open it up……”are we having fun yet?”…..and when those chords explode we sure are.

A polite break for much applause, and the band is back for a rip-snorting Million Miles An Hour which is just crushing, and the mammoth Burn It To The Ground driven by twin Gibson Explorers to round out the show. That is how you finish off a rock show! Brisbane Cheers!

Support on the night was Bad Wolves – Review and Photos here!