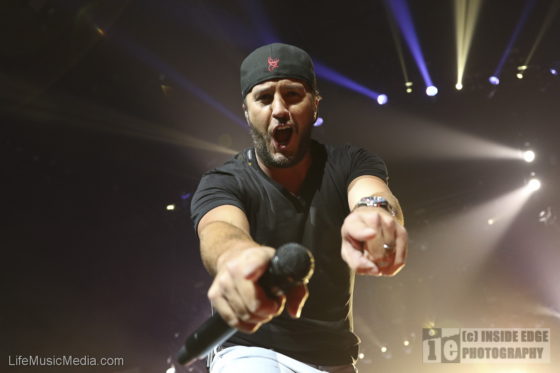 An excited crowd scooted to the Qudos Bank Arena to witness the first Australian show for USA Country-Rock superstars Luke Bryan and Dustin Lynch both here for the CMC Rocks festival in Queensland. Luke is now Country Music royalty, and Dustin one of the up & coming artists – 750,000 Instagram followers for him, compared to 4.5 million for Luke.

With the arena filling up quickly, the lights dropped and smoke, strobes, roving searchlights, and the Beastie Boys classic Fight For Your Right (to Party) announced the opener, and Dustin Lynch powers straight into Hell Of A Night – with rock riffs and a seriously tight rhythm section. The only real giveaway is Dustin’s Stetson. This slides smoothly into Mind Reader featuring some tasty slide guitar. A little intro of Flo Rida’s My House rolled into State Lines, then a stirring organ intro and Dustin playing guitar for the solid ballad Love Me or Leave Me Alone.

Some interplay with the guitarist and bass player roaming across the stage like the three amigos chatting to the front row ladies through I’d Be Jealous Too, went down well with the growing crowd – being a bit poppy with some grungy guitars. Cowboys and Angels was dedicated to his grandparents, and saw the Arena light up with several thousand cellphone lights, and featured a very tasty solo. Back to the rockier side to close with Small Town Boy and Seein’ Red being two of his better known tracks, and he no doubt made a lot of new friends tonight.

I have not seen the Arena as full as it was by the time Luke Bryan hit the runway in front of the stage curtain, and a huge reception greeted him and a solo start to Huntin’ Fishin’ and Lovin’ Every Day while the band chipped in from the rear. After the curtain dropped to reveal the musical collective of organ, lap steel guitar, bass, drums, fiddle and guitar, we get the full range of showmanship from the frontman.

The classic country pop ballad of Someone Else Calling You Baby steamed straight into a glorious guitar-driven Kiss Tomorrow Goodbye before some friendly chat with the crowd, and then the new single What Makes You Country is a pumping rock song, with a great and catchy hook, and some archetypal ‘good ole boy’ lyrics – and he lives the life he sings about. The cross-over Rap / Country of Kick The Dust Up raises the roof, and features a blistering guitar solo, and this rolls on into the familiar riff of This Is How We Roll (which he sung with Florida Georgia Line) pushes the crowd into more of a frenzy, before dropping the mood back with the mellow love song Strip It Down, with Luke getting a bra or two thrown onstage. Awkward with wife and kids sitting in the wings, but handled well!

The band continues to take something of a back seat, seemingly tethered to their positions towards the rear, but they are crucial to the power of the performance, with some nice touches on the organ, the lap steel guitar and the sensational fiddle-playing. There is a bass-heavy intro to Drunk On You, a Luke Bryan classic, with duelling twin lead guitars, and lots of audience participation. Then while he sets up for a solo spot, the chant of “Shoey Shoey” goes up, and a cowboy boot is passed up to the stage. Not one but two beers goes in, and most then pours out over Luke and his guitar! A medley of bits of Someone Else Calling You Baby, Home Alone, and Fast brings some calm back to the set, until the cry of “Any Party Crashers In The House” brings on the pumped-up Crash My Party where the crowd loses whatever they had left!

Drink A Beer lights up the arena with the cellphones again, and the party just keeps on with Roller Coaster, Play It Again, and closing the set with Move, before the roars of the crowd bring him back for the epic Country Girl (Shake It For Me), and That’s My Kind of Night. 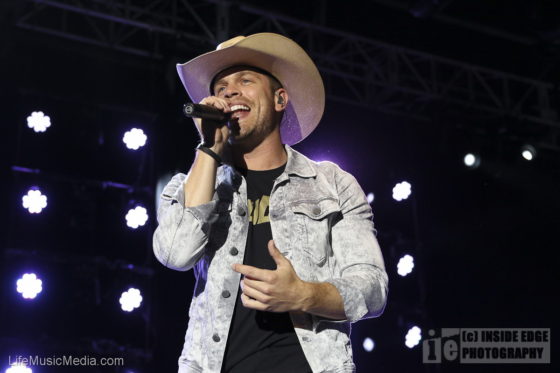