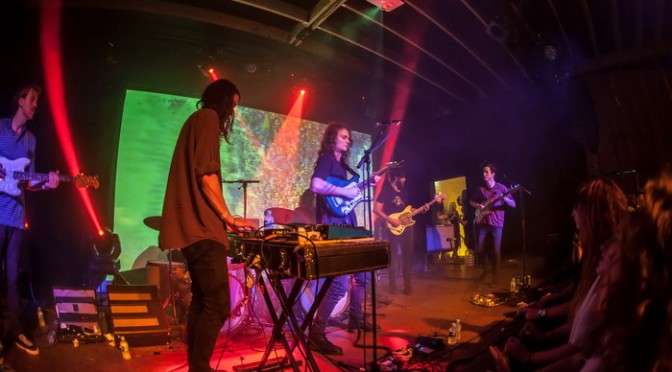 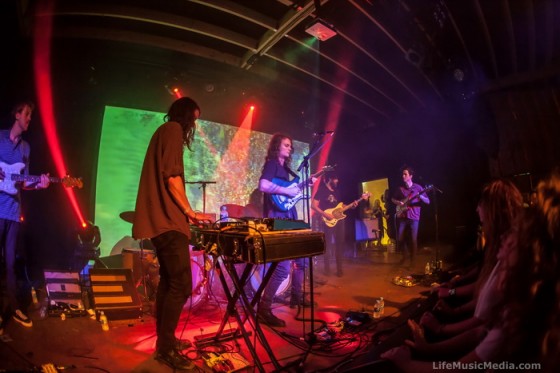 As a King Gizzard & The Lizard Wizard gig virgin, there’s one thing that immediately grips you – and surprisingly it’s not the cacophonous wall-of-sound that a seven-piece band delivers. Beneath that is the sense of deep confusion which comes from taking in all of what is happening on stage, and then being absolutely convinced that there is no logical way this should work.

The opening tracks of what was ostensibly the writhing beast’s welcome home gig after a tour of Europe, spoke volumes of the gravity-defying feats of the stage show. Scanning from one side of the stage to the other, the pieces just should not gel together – a gaggle of guitarists who change their instruments regularly, two drummers hammering at two kits in unison, a wild-haired vocalist who sports at various times a high-worn guitar and a flute, and a lank haired blues harmonica player who spends equal measures sauntering the stage and diving among the throng.

It’s a complete sensory overload from the moment they crank into the set, and it’s captivatingly stunning. The crowd is a euphoric mass and from the moment the first legs went flying over the mosh’s heads, it was a constant wave of over-joyed outpourings. Each song is greeted with a rapture greater than the last, culminating with a collective shit-losing for a whimsical ditty about Vegemite.

Singer Stu Mackenzie’s voice is ethereal and disconnected, processed through canned and reverbed effects to render it almost obsolete, but that lends to the dreamy and trippy touches. The combined drummers crack the back-line to attention with nary a waver. And that backline, which extends itself to multiple guitars and basses depending on the tune, is what carries this whole thing off.

It’s best displayed through the medley surrounding title track I’m In Your Mind, which surely pushes the 20 minute barrier. At times you’re being brought to pre-orgasmic plateaus before being mellowed and cajoled and lulled and warmly embraced. All the while, the dexterous rhythm section pulls it all along, deftly allowing the teasing touches to lick and caress. And just when you think you can’t take it anymore, the dam breaks and overwhelming euphoria envelopes and tugs you. It’s one helluva way to lose your virginity.