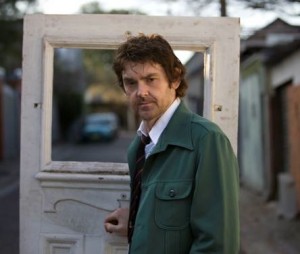 PB: So, Pinky, was this your idea, to do this interview?
PB: No. I don’t know whose idea it was. But I think it’s a very good idea, so I’m running with it.

PB: You’ve just released your first album, Somethin’ Somewhere Better. How was that?
PB: How was what?

PB: How was that process?
PB:  You mean, how did we record it?

PB: I mean.. yeah. I guess. Um. I mean… what were your influences?
PB: My influences? That’s a very complicated question. I don’t know, gee, I expected this interview to be different.

PB: In what way?
PB: Well I thought you would have at least done a tiny bit of research. And that you would avoid the questions that every so-called musician in Australia gets asked, every time, every interview.

PB: Yeah. True. Sam Sparro.
PB:  Has anybody asked him about his name?

PB: Dunno. Do you want to talk about your music?
PB: Do you? Does anybody?

PB: I heard the album’s had really good reviews.
PB: Yes it has. Except for one street press mag in Brisbane. They said it was shit. Everybody else said it was brilliant.

PB: Do you think that’s a problem? For you?
PB: I don’t know. I’m not sure how influential that street mag is, and whether their readers believe everything they read. Personally I think the review was very poorly written, so perhaps that will persuade some readers to decide for themselves. Some Brisbane people told me Rave magazine is better. I don’t know.

PB: You sound a little bitter.
PB: Maybe. Possibly. I hope not. Nobody wants to be bitter. Usually I try to avoid reading stuff like that, because you can get discouraged, or yes, bitter, I suppose. Mostly I try to focus on the positives. Life’s hard enough, you’ve got to try every day not to let stuff get you down.

PB: Now you’re the one coming out with the clichés.
PB: Yes I just realised that. I’m sorry.  Maybe we should try to talk about something else?

PB: I have a list of stuff here the editors asked me to talk about.
PB: OK. Hit me.

PB: Was that deliberate? The decision to go in a completely different direction?
PB: Yes I guess so, although it seems kind of logical to me. I don’t like doing the same thing over & over again. I like new things. That said, I’m still trying to learn stuff. To get better at things I’ve been doing for a long time.

PB: How have your views changed over the years?
PB: OK. Um. My views politically I think have become clearer. I feel like I’m getting to an age where I know enough to be better equipped to sort the rubbish from the slightly-less-rubbish. And maybe that applies across the board.  Music, books, etc. I suppose I feel much more comfortable in my own skin than I did ten or twenty years ago. I guess I have more understanding of who I am and why. Is this what they want to know?

PB: Like I said, I have no idea. But I think maybe you should be less honest, or earnest or whatever. You kind of sound old & boring.
PB: Jesus. I don’t want to sound like that, ummm… maybe I should talk about girls or something. I still like girls. I guess 5 or 10 years ago I was going through this older-woman phase, and that’s changed a bit. Um. [long pause] I’m much less out of it than I was 5 years ago. I’m not off my face every day. Not any more. I’m playing better, and singing better these days-

PB [INTERRUPTS]: I think if it’s alright with you I’ll just skip to the next question.
PB: Cool.

PB: How the industry has changed?
PB: That’s a question?

PB: Put it this way: how has the music industry changed?
PB: Jesus! Are they paying me for this? People get paid to talk about stuff like this.

PB: Nobody’s paying you. Except maybe in some sort of promotional way. Maybe someone will read this and buy your record. Just answer the question.
PB: Well OK. [PAUSE] Possibly that’s the crux of how the music industry has changed, right there.

PB: What do you mean?
PB: Well… not long ago, you kind of knew who was happening.  And who wasn’t.  And there were ways to get yourself out there, get a following happening. And those ways were limited.  And generally able to be understood.  And contained – or perhaps containable is a better word.
Nowadays… nobody knows what’s going on.  There are 100 zillion blogs. Websites.  Little things, everywhere.  An endless array of chatterers, chatting.  And nobody knows how significant anything is. See I could do this interview, and 2 people could buy my album because of it.  And then if I write 44 thousand of these things, then I might sell a half-decent number of albums.  Or I might not.  Nobody knows.  Nobody knows how anything works or why.
Triple J could choose to play my music tomorrow. I have similar odds of being picked for the next Chinese moon mission.  And yet it might happen.  I live in hope.  I’ve always wanted to travel in space. But the thing is, once upon a time, the lack of airplay would’ve been the death of me, as a musician. But now… now maybe it doesn’t matter. It is possible that nobody is listening to the radio anymore. It’s hard to tell. Personally I think the National Broadcaster is still very very important, and if I knew who was the right person to fuck/kill/bribe to get some airplay, I would fuck and kill and bribe all day long.  But the kids tell me it doesn’t matter anymore. They say aah, we’re all listening to Last FM. Or hog radio. Or games warehouse.  Or Silent Space or KantZpell Blog.  Or The Beecroft Rectangle.
You see what I mean? It’s all dissolved in some weird way, like sugar in a cup of tea. And nobody can pinpoint the significance of anything with any certainty except to say that never ever before in the history of music has it been so important to wear the right shoes. Because that’s probably all that matters now. It’s like the whole music world has been hijacked by people from Melbourne. And sadly, it’s forced me to start wearing the wrong shoes. Deliberately. For the first time in my life. Because once everybody in the world starts focussing on the correct footwear to the exclusion of all else – and believe me, once upon a time long ago there was in me a deep and firm belief that this would be the salvation of the world, this close attention to footwear – once everyone in the Universe believes it’s all about the shoes, then surely the only meaningful thing a (so-called) artist can do is to wear the wrong shoes, deliberately, or perhaps abandon footwear altogether, which is not certainly not the same thing (and I would argue, not very useful) but it’s what my guitarist Nick Stewart has done. And he’s a terrific person, and a sensational musician.

PB: OK. Moving right along.  What advice can you offer up-and-comers?
PB: Are you serious?

PB: Apparently, yes. That’s one of the questions in their email.
PB: How old do they think I am?

PB: I dunno. You look pretty old. You look like you’ve had a few late nights.
PB: Thanks. I think I look OK for the sheer number of late nights I’ve had. But hey. What was the question?

PB: But come on, surely you’ve learnt something useful?
PB: Yeah. Get a good publisher. Trust your own instincts. Try not to let cynicism completely overwhelm you. Resist the urge to top yourself. All of these things are fairly useful, I think. Mostly. Sometimes. I don’t know. Actually, scrap all of the above, it’s rubbish and probably only applies to me personally. For everybody: I think it’s important to find a pigeon-hole. My number one piece of advice to all of the world’s musicians, if I were forced to give useful advice: find a pigeonhole as fast as you can, and fully embrace it. Whether it be the dreadlocked surfing amateur ecologist thing or it’s more your denim/average guy/lots of denim thing or it’s your pretend edgy but in no way scary thing… it doesn’t matter, so long as you FULLY EMBRACE YOUR PIGEONHOLE. And so long as you remember that in the eyes of the world, particularly the cashed-up world, the music is a billion times less important than the pigeonhole.

PB: You sound bitter. Again.
PB: Not at all. I’m fine with this, because it makes everything a lot simpler in some ways. “Hi, I’d like one small serve of dance with a thin veneer of indie please.” “Yes of course, we have several of those, they’re in that rack there.” “Oh, I see. Have you got one with a thinner veneer? This one is a little too indie.” “Yes, just… just there to the left. You can tell by the belt, see that guy’s wearing a white belt. It’s ironic.” “Oh wow, you’ve got heaps. Thanks, I’ll have a look.” “Cheers.”

PB: Have you found your own pigeonhole?
PB: Not lately. But I’m working on it. I kind of messed up, because I started worrying about the music first, and trying to get that right. And now, according to a lot of music industry types, the music doesn’t really go with the rest of me so well. So. It’s hard to squeeze it all into a pigeonhole. And then I kind of found a pigeonhole but it turns out that the pigeonhole I chose doesn’t fit inside all of the other pigeonholes. See, your pigeonhole has to be able to fit inside other pigeonholes. It’s difficult. And my name is a problem too.

PB: Your name?
PB: Yeah. I have a really stupid name. I need to change it because it doesn’t fit the pigeonhole I’m trying to squeeze into.

PB: I thought you didn’t want to talk about that.
PB: I don’t really, except it’s useful to illustrate the point I’m making. And the thing is, name-change, that’s tough. Prince tried it and it caused problems. John Cougar Mellencamp has wrestled with this issue all his life. Which is interesting, given the array of issues he had to choose from. And you know, perhaps the only thing more stupid than being called Pinky Beecroft would be calling myself The Artist Formerly Known As Pinky Beecroft. That, or Missy Higgins. Now there’s a stupid name. Terrific artist, I believe. But hella stupid name.

PB: What new challenges would you like to tackle in the years to come?
PB: Is this another question from-

PB [interrupts]: Yes, come on. Answer it. What new challenges would you like to tackle in the years to come?
PB: New challenges. Jesus. I’m barely coping with the challenges I’ve already got. Ill health. Lack of airplay. The death of good manners. The global supremacy of idiots. How many more challenges do I have to face? I dream of a life less challenging. Don’t you? Doesn’t everybody? Mostly I would like to face the challenge of having too much money, and too many fans. Apparently that’s a real challenge, I read about it in an interview with Nicole Kidman.

PB: Time’s running out. In fact once you slag Our Nic, time is well and truly up. So. We’ll have to leave it there. But may I say, your album, “Somethin’ Somewhere Better” is the best album released in Australia this year.
PB: Absolutely. Spread the word.