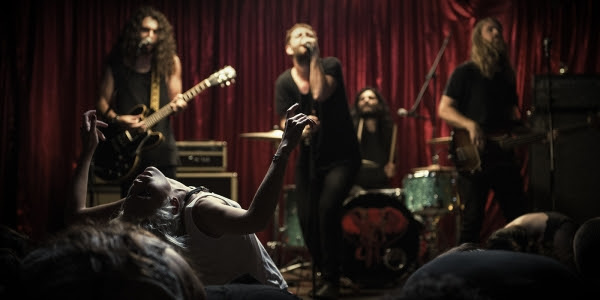 The Boys from Kingswood are fast earning a reputation as one of the hardest touring bands in Australian rock n roll. Ending 2013 with a mammoth national tour with Calling All Cars, and kicking off 2014 by dominating stages along the national Big Day Out tour, they continue their run in April and May at Groovin The Moo, and their recently announced east coast city headline shows.

In December they released ‘Sucker Punch’ the first track from their forthcoming LP (due in store May 2014 via Dew Process). Recorded in Nashville with with Grammy Award winning producer Vance Powell (Jack White, Arctic Monkeys, Kings Of Leon), ‘Sucker Punch’ follows in the wake of their previous radio favourites ‘Yeah Go Die’, ‘Medusa’, ‘She’s My Baby’ and ‘Ohio’ and presents an equally captivating video to the one that accompanied the aforementioned ‘Ohio’.

Known for their always over the top film clips (their cinematic debut for ‘Some Motherfucker’s Gotta Pay’ scored a nomination for Music Video of the Year at triple j’s annual J Awards), the clip Sucker Punch features MTV’s gorgeously talented VJ, Miss Kate Peck in the starring role, and comes with a disclaimer …

“All stunts were performed by professionals … Don’t glass your mates!”