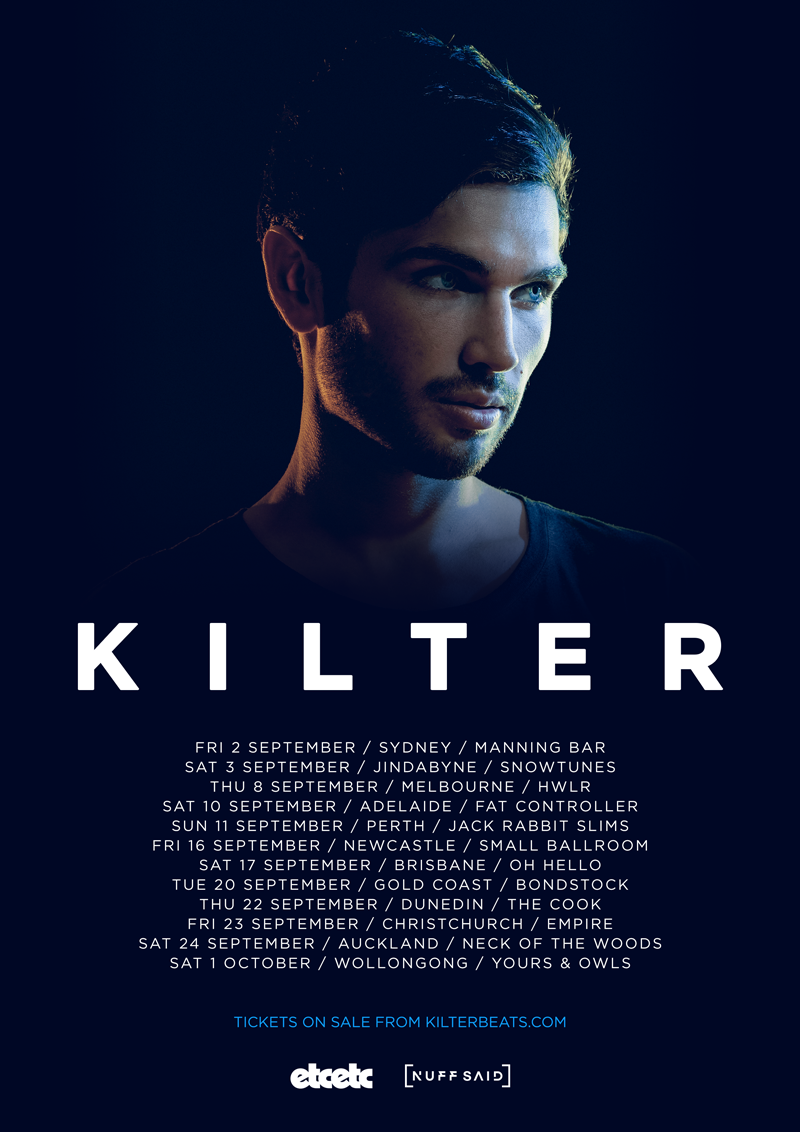 After playing to sold-out crowds in 2015 with the likes of Rüfüs, Hermitude, Carmada and Little Dragon, and on the back of upcoming UK and European summer festival appearances such as TheSoundYouNeed in Malta, and Ephemere in Tunisia – Kilter have announced a national tour hitting all corners of Australia and New Zealand this September.

Since exploding onto the scene a few years ago, Kilter has been at the forefront of the new wave of Australian electronic artists, extensively touring the country, playing all major festivals and wooing crowds with his infectious live show. From September 2 at Sydney’s Manning Bar, through to Wollongong for Yours & Owls festival on October 1 – prepare to witness the accomplished producer in his element. Kitted with drums and synth-gear galore – Kilter zooms between keys, sample pads and drumstick duties – bringing his productions to a new dimension.

Kilter says of the live process: “When it came time for me to bring my music to the stage having an instrument in my hand is what felt most natural,” Kilter credits an upbringing surrounded by music at home and jamming in school jazz bands. “Using drums, keyboards and samplers I can perform and express myself in a way that’s unique to that particular show and crowd. That uniqueness is what I’ve always loved most about seeing my favourite artists perform and it’s what I try to capture at a Kilter show.”

Recent single “Fool For You” is out now on etcetc and features Kilter’s signature production and a sultry female vocal. Currently holding over 2.5 million spins online, the track has had love from triple j, community radio and the likes of Majestic Casual, mixmag and more.

With two Hype Machine chart-topping remixes under his belt for heavy hitters London Grammar, Ben Pearce as well as a #3 place for Duke Dumont, it’s clear that Kilter’s remix game is tight. His originals – from “Want 2” featuring Porsches that has 2 million plays on Spotify alone, to the Flume remixed “Gravel Pit” with Matt Miller and the GRMM link-up on dusty hip-hop number “Look At Me” – are evidently just as strong.

Don’t miss the rich soundscapes and killer crafted remixes from Kilter in a live setting this September. Be it summer vibes courtesy of bouncing steel drums, or nods to his hip-hop influences – catch the unmistakeable sounds of Kilter at a show near you.