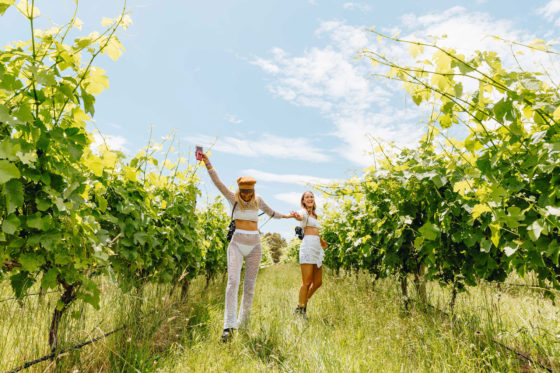 The wine has come for Grapevine to uncork its bottler 2018 wine-up! Spilling across Victoria, and for the very first time NSW, Grapevine presents The Wombats, Client Liaison, The Jungle Giants, Tkay Maidza, MK, Miami Horror, Lovebirds, Dom Dolla, Young Franco, Joy and Arroyo! How grape is that? Not too Chablis!

Drink in some of the grape-est musical acts on the vine as Grapevine follows up on its sold out inaugural event with an experience that’s already better with age. Delicious food, refreshing beverages and of course, plenty of amazing wine to tempt the palate, Grapevine will make sure you don’t draw a blanc when it comes to planning your good times this summer.

No strangers to Australian music lovers, the dramatic ascent of The Wombats has continued with a massive 2018 which has seen the release of their fourth long player Beautiful People Will Ruin Your Life, and a string of massive festival and sold out headline appearances across the globe. With a knack for writing only the tastiest of indie bangers, The Wombats are best served with a deep, earthy red.

From their very own fashion label, self-titled festival and a string of much-loved, radio friendly, dance pop via the 90’s anthems, Client Liaison have melded kitsch and substance to become one of Australia’s most powerful live electro outfits. Always a guaranteed good time of excess, the duo have a fine nose for a vintage bouquet and deliver high yields of taste.

Riding high on the waves created by their self-produced third LP Quiet Ferocity, The Jungle Giants have fast become worldwide favourites. Ruling airwaves with singles like Feel The Way I Do, The Jungle Giants have racked up massive stream numbers and have sold out shows across the planet including show-stopping sets at Australia’s biggest festivals. The Jungle Giants are like a crisp fruity white, delicious and deeply refreshing!

Reining Australian electro hip hop royalty Tkay Maidza can do no wrong. This Adelaide via Zimbabwe rapper has sleighed all-comers with her superfast flow and dancefloor ready anthems. With high profile appearances on hit TV soundtracks and glowing live reviews stacking up Tkay’s future is ultra- bright! Like a fine, high-end Champagne Tkay is intoxicatingly effervescent and only gets better with age.

U.S. producer, remixer and DJ, MK brings his Detroit style via the iconic sounds of Depeche Mode, The Cure and New Order in an amalgam that is both forward in progression but classic in flavour. His musical path is made up of seamless transitions from house and techno to hip-hop and R&B, returning to house during recent years. With a rich and varied palate MK can be enjoyed with your favourite Pinot Noir.

Home grown indie electronica heroes Miami Horror have barely put a foot wrong since starting out as a solo project for Melbourne producer and DJ Ben Plant. Having since evolved into a fully functioning live outfit, Miami Horror have continued to distil their own compelling blend of dance pop resulting in their fourth release “The Shapes” – a visionary project that focuses on the amalgamation between music and visual art.

Lovebirds is the solo project of Hamburg resident Sebastian Doering. Responsible for numerous club hits and deep house masterpieces, Lovebirds brings a deep sophistication to the dancefloor as experience and passion combine to build a repertoire high on class and big on dancefloor wow factor. This vintage blend is smooth in texture and high on taste.

In the rapidly expanding global dance music scene, artists are a dime a dozen, but Dom Dolla continues to increase in value as Australia’s most in-demand electronic DJ and producer. Dom’s grinding basslines and energetic jackin’ house sounds have resulted in half a million monthly listeners on Spotify, banking over 23 million plays in total. When it comes to world class blends, there is none finer than Dom Dolla!

Brisbane producer Young Franco has been delivering the fire with sold-out shows all over the world and over well 15 million streams of his now signature take on house, grime and deep groove. A proven party starter, Young Franco is a star on the rise, and a sure shot addition to any line-up. Though only young on the vine, Young Franco delivers quality taste beyond his years.

The only at the genesis of her musical career, classically trained, 17 year old, Brisbane based singer and producer Olivia McCarthy aka Joy has already garnered admiration and loads of attention via her debut EP Ode, a collection of songs that show a musical maturity far beyond her years. Just like a fine young wine, Joy shows much complexity of flavour for such a new vintage.

Arroyo are a fresh, Gold Coast based, dark pop production duo with a style reminiscent of the likes of alt-J, James Vincent McMorrow and Bon Iver. Their latest single ‘Please Just Let Me Know’ is a soul-infused slice of down-tempo indie-rock, intense, yet spaciously dynamic. Fresh, clean and sparkling, Arroyo leaving a welcome tingle in your heart.

We’ll be sad if you chianti make it, so don’t be a goon, get in fast as this vintage is sure to sell out again!