This was my first Falls Festival and it was an event that I will remember for the rest of my life. 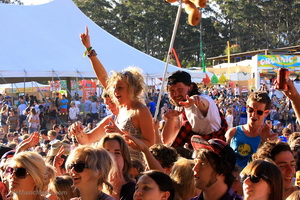 Absolutely everything that was put in place by the organisers was solely for the enjoyment of the 16,000 attendees. I would find it really hard to find something negative to say about the whole experience.

Firstly, the organising committee have to be given a massive thank you for putting such a high level event. From our arrival we were subjected to VIP treatment. VIP camping grounds, with warm showers may I add, which come in handy when the temperature plummets to 5 degrees. In typical Victorian style the weather fluctuated between 5 degrees at night to 41 degrees in the middle of the day.

The food was not the typical fried and fat food which accompanies festivals, but rather an international menu catering for many palates. And if you were inclined to eat the fried food that was also available, but just in smaller quantities.

Every festival has its own vibe and appeal and Fall Festival carries with it a general expectation that throughout the event you are dancing away the previous year and welcoming with open arms the new cycle. Falls Festival has the perfect venue, line-up and agenda. What could be more perfect then camping in national protected forests, listening to the best international and national artists while welcoming the New Year? Nothing is the only possible answer.

It is of note that this is the 18th year Falls Festival has run and judging by the sell out crowd in attendance, there are still plenty of future festivals coming our way.

There were three standout acts for me, Public Enemy, The Cool Kids and Paul Kelly. That is not to say that the rest were not exhibiting a high quality product, but overall these three were the ones that caught my attention the most. Public Enemy took us back to the 1980’s when we were all fighting the power by performing Fear of a Black Planet in its entirety. It is such a pleasure when an album released two decades ago is still relevant today.

Paul Kelly is such a polished master of music whom continues to be a bench mark in Australian music. Much more recognition should be afforded to such an icon within our industry.

We are blessed in this country that we can celebrate in relative peace a New Year with 16,000 other people along with the best live music from across the world. With the explosion of countless festivals it becomes close to impossible to try to figure out which one will be a good option to attend. If I were to advocate for one festival it would be Falls Festival. Free camping, 10 mins from excellent surf breaks, and excellent music makes Falls Festival a must do for 2011.